From The Vinyl Mine: The Meatmen 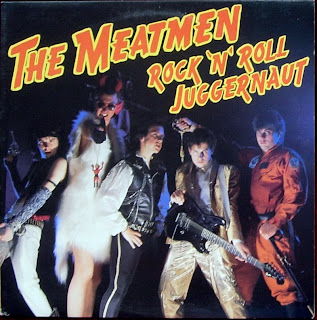 This 'ere LP was the fourth second of the Meatster's post-We're The Meatmen and You Suck albums continuing the theme of metal parody begun with War of the Superbikes. Musically mostly spoofing 80's hair bands and also delving insulting and mostly unfunny comedy bits is pretty much the meta on this meat -- the general result is the musical equivalent of Tesco Vee underwear skids. Sorry.

Easy targets are lined up - decadent rock and roller's (title track), homophobic rednecks ("True Grit"), stereotypical gay men ("Dichstrudel") and neo-hippy punks ("Nature Boy") -- and said targets are mowed down without remorse. The playing is thin and uninspired for the most part - the recording kinda flat.

A few songs aspire to transcend the bad-natured mocking to participate in the High Mass that is Classic Rock and Roll - some reach a bit too high ("The Sweetest Kittens" is the sweetest failure here) and others, despite having a helluva hook just don't make much sense ("Centurions of Rome").

One song here, though -- "Turbo Rock" is worth preserving and laminating in your bodily fluids of choice... don't know why it exactly works - maybe it's the fact that Tesco Vee is actually writing from some sort of real or imagined personal experience or maybe his Motor City roots genetically made him unable to fuck this one up since its about cars and racing and drugs and delinquentism. Except for "French People Suck" which is a lookback to their greatest album (We're The Meatmen and You Suck), the song sports the best use of Tesco's Satanic croak and it's one of the few tracks that isnt' full of embarrassingly suck-ass lyrics. This of all the songs are more worthy of the guy who co-founded Touch and Go Records, invented sippy cups (per his myspace) published Touch and Go fanzine and pretty much spread the word on some of the early hardcore punk godhead bands - Necros, Minor Threat - before most of the rest of us shitheads caught on. Some of the lyrics here are tongue in bile and more than a little cliche ("This is the 80's / high time for turbo rock") but this song ranks up there with the best of Thin Lizzy / Motorhead / Nugent racing rawk n' drugs and gurls thing. It would fit like a tight leather racing glove on Alice Coopers gnarled decrepit hand.

Any good Tesco stories to share? Great live shows but pretty retiring off-stage from what I saw.

Southern Rock's meatpage has a discography - I forgot Tesco also came up with phrase "God's Bullies"
Posted by Jim H at 9:55 PM

Actually this was the 3rd Meatmen LP. The first of course was We're the Meatmen and you Suck (one of my all time favorites), then it was War of the Superbikes followed by this LP. Man I haven't played this record in probably close to 15 years now that I think about it. I remember liking "French People Suck" simply because it was a new version of "Cripple Children Suck" but not much else sticks in my memory. Guess I'll have to dust this one off again and revisit it.

I stands corrected - I kinda remembered it like that too but didn't find a good chrono-based discography to work from...

I have this record on an old TDK cassette. I break it out every few years. I think it rocks from beginning to end, but thats just me. Feel free to post the whole album if you got it. Hey, its out-of-print :).

This was the first Meatmen record (tape, actually) I ever bought. The inspiration came from taping the song "Turbo Rock" off of WPRB (Princeton) when I was a teenager. I think it still holds up as a great, bananahead punk/metal record, though I could never quite wrap my head around the song "Centurians of Rome". Also, I failed a few classes sometime shortly after buying this, and my mom assumed the no-good rock music was to blame (it being the 80s and all) so she tossed my copy of this, along with Suicidal Tendencies' "Join the Army" album. Funny.

Ouch. I haven't heard this album since at least 1990, but it was really one of my favorites back in the day, and I definitely think it's the best of the Meatmen catalog. I always thought their Spinal Tap/Dicatators act was much more entertaining than the "offensive" schtick. In fact, I've been looking for a copy of this for a while now.

Granted, there's a lot of stuff I thought was hilarious when I was a teenager that just sounds stupid now ("Becoming a Man" jumps to mind). But "Rock n Roll Juggernaut," "True Grit" and "Come on Over to Mah Crib" were, in my opinion, very rockin' tunes, and all of them had (at least at the time) some funny lines ("Got my action slacks at Montgomery Ward"). The only tracks that totally fell flat for me were "Nature Boy" and that stupid skit about the sex toy store. Well, and "French People Suck" stopped being funny after about the third listen. But even "Dich Struedle" has some pretty great, twisted (no pun intended) imagery.

The ugly truth about the Meatmen is posted at http://www.afterbirthofthecool.com/012407.html.

So, as it happens, I found a copy of this at the flea market over the weekend, took it home and listened to it, and I think it holds up pretty well. To give maybe some insight into what I like about it, this came out when I was around 18. It seems like around that time I pulled out some of my old Judas Priest records and said, "Hey, I haven't listened to this stuff in a while, let's give it a spin." Now, as I remembered it, Judas Priest were this incredibly tough, heavy band, but when I started listening, all I heard was this stiff, precise, slick music with all the life produced out of it. Well, Rock n Roll Juggernaut is what I had remembered Judas Priest sounding like. The one funny thing about listening to it now: I always thought "Centurions of Rome" was the funniest song on the album, because they tried to play it with a straight face, but listening to it now, I'm not so sure it was meant as a joke.

OK, you asked for Tesco stories. I saw them twice during this period, I guess it would have been summer '86, then again in summer '87. The Psychedelicatessen even opened up for them the second time, and we got to meet him backstage briefly (he was relatively mellow and polite offstage). From the first show, what sticks in my mind was the a capella version of "Mr. Tapeworm," arranged sort of like an opera tune. From the second show, possibly my favorite moment from any concert, Tesco did this whole long, blasphemous speach, holding up a statue of Jesus with "Fuck Me Hard" painted on it, spitting beer in Jesus' face, blah blah blasphmey, and he finishes up by saying "We're all going to burn for what we're doing here tonight, so when you're in Hell, and it's Saturday night, be sure and pay a visit to...THE DEVIL'S WHOREHOUSE!" And the band immediately launched into a friggin' amazin' version of the Misfits song!

I also saw Tesco Vee and the Hate Police around 90 or 91, and it was one of the worst shows I've ever seen.

This is probably a really dumb question....but I just listened to the song (not the album) "We're the Meatmen...And You Suck!" and I love it, but I can't seem to find it anywhere! I checked the track listing on that particular album but it doesn't seem to be listed....is it the Mystery Track on the vinyl that isn't on the CD? Or was this song just released as a 7"?

This album certainly brings back some wild and fond memories, and has the distinct honor of being one of the first 3 tapes I ever shoplifted back in 7th grade. The other two were, Black Flag's My War and Misfits' Walk Among Us -Not bad for a night's work!

And 20 years later, I'm still listening to The Meatmen...

I heard this album in 87 on tape, and was not too impressed cause my tape player sucked. Listened to it on real audio and it is really great. Unique, so is the last record 'war of the superbikes'. Really like the music on this MUCH more than I did in the 80's. Life and maturity can really evolve someone's music appreciation. I have to say this about DANIEL's message. I would NOT be happy to have Black Flag's My War on tape. Thankfully you shoplifted that tape, cause it's not worth the price of the tape. Check out Black Flag's 1982 Demos tape. That has the 'My War' and 'Slip It In' Demo tracks, the one's they recorded. That bootleg tells the story of the new developing sound of Black Flag with Henry, and without Kira on bass and without Bill on drums. If that would have come out legit on record, on SST, in 1982-83, I think, Black Flag would have been a very different band in 1984. Just my opinion. Love the Meatmen!

Good job Daniel in getting these tapes by shoplifting. Mostly the Black Flag's My War tape. That is not worth anything. So you make out with not paying anything for a tape worth nothing. Now, check out Black Flag's 1982 Demos bootleg. It is available on the web, so you should be able to check it out. THAT is what Black Flag SHOULD have sounded like in 1983! Too bad that record did not come out and My War did. Well that is what I have to say. Still love Black Flag, Still Love The Meatmen.