From the Vinyl Mine: Brave New World 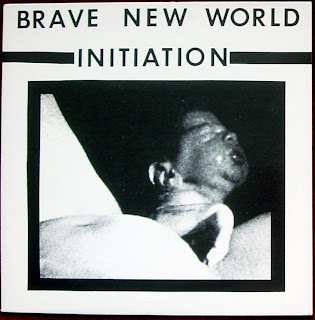 There's no references to this band at all on the 'net but I do know they came to do a distribution deal with Bob Durkee's Fartblossom Enterprizes label in the mid-80s and despite his stint with Pillsbury Hardcore, Durkee had one of the good ears for bands in Southern California at the time - his own label having released Subculture, Ugly Americans and Dain Bramage. So maybe if Durkee isn't too pissed off still about my treatment of his Pillsbury Hardcore 7", he might pipe in and tell us some more about the band.

Far as I know, this mini-LP is all the band came out with - it's hard to search for anything with the words "Brave New World" and not run into millions of sites discussing the Huxley novel. Like Huxley's novel there's a strain of social criticism running throughout the record. The music is a hybrid garage punk-psyche (keyboards) and with occasional moshing hardcore guitars/drumming constructs. The song topics veer more towards hardcore and post-hardcore topics - anti-society ("Sitcom"), pro-self improvement ("Initiation") and probably other things I'm not getting because there's no lyric sheet and vocals are often indistinguishable from the din and racket of the effects pedals and guitar buzz. There some similarities here to Rites of Spring's LP that was released in the same time period - in songs like "I Care!" and especially "3 Days After Liberation" you can almost hear singer James Roebuck pulling his hair out and rending his shirt to shreds. One of the more obvious comparisons -- thanks to Roebuck's voice mostly - is to Public Image, Ltd - the album opener almost sounds like Lydon doing guest vocals. Elsewhere such as in "The Worker", Roebuck sounds more like Jello Biafra so maybe he's choosing vocal styles to fit the song - the worker being about his most political song here. I'm also reminded of Reptile House - listen to "Like Van Gogh" and I can't help but be reminded of weird viciousness "Keel-haul Love"...

My complaints about this aren't that many - it's a shame this band didn't get more attention or get a chance to "spread their wings" beyond this record. Mainly I will make the typical complaint of music from this period/genre - it could use better recording/engineering. Also, keyboards are sometimes ladled on a bit too thick such as in "Sitcom" where the organ dominates a song (is it just me or are these chords the same ones Dylan used in "One More Cup of Coffee"?).

Anyone know more about this band? What happened to them - was there more music recorded?

Side 1:
Side 2:
All music recorded directly from vinyl with pops and clicks mostly intact (I do a little editing and cleaning up). You may need to adjust sound levels up on these tracks.
Posted by Jim H at 5:15 PM

Agree with all you've said, especially the weird similarities to Public Image Ltd in the vocal department. This was one of the truly mysterious artpunk records I came across while DJing at WPRB. Great pick! Thanks!

There was an LP produced in 1987...it is very rare.
For more info email tmhoward@neo.rr.com

hi - james roebuck here - the singer of this here brave new world band. thanks for the cool review - yeah, we put out a 7 inch and another lp but the band broke up right when the lp came out and so it never saw the light of day. The album "Noise from the heart" was more eerie I think... but I've always liked it. If I find a way to rip the vinyl to a digital format I could try and post something.

I'm still kicking and am in a band called The Mission Creeps now - http://www.myspace.com/themissioncreeps/
it's a bit different but still having a blast making noise!

I agree about the recording quality/engineering aspects - but we had little money at the time - so we did what we could.

if you have any questions or anything, feel free to contact me - and thanks again for the interest
later
james
cliffjames1@gmail.com

Great band to say the least, right up there with Peace Corpse in terms of quality and musicianship. I really think they could of gone to the next level had band members been more motivated and didn't suffer from severe pesonality clashes. Glad to see that they're getting some props (finally!)

Hi there! I thought I'd post this here in case someone finds this site (as I did) while searching for info about this recording.

I have a copy of the Brave New World LP in very good condition, and would be willing to sell it if interested. You can contact me at anna [AT] absolutely-vile [DOT] com.

It did come with a lyric insert - our copy has one if anyone is interested:
http://cgi.ebay.com/ws/eBayISAPI.dll?ViewItem&item=380211110395

I know the drummer and where the drummer is. If you are still interested in learning about the band, let me know.