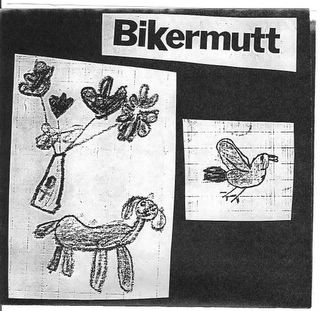 A late and almost final release from my ill-fated band (I previously reviewed our post-humous cassette). By this time (late '80s), we had pretty much whittled the group down to two people. Our crackhead bassist (the second one, not the first one) had disappeared and the guy that I hated so much because he was an incessant "jammer" had finally gotten pussy-whipped enough that he stopped showing up. Although the record came out in '90, I'm pretty sure it was recorded several years before.

This record was really all Bernie, though. I'm just along for the drums and the drums are the worst part of it, being so poorly recorded. Its tough near impossible to make drums sound good with a four-track unless you go for the lo-fi minimialist thing. That said, Bernie's guitar overlays are near perfect so I'm kinda sad we didn't have the brains to go to the studio for the drum tracks as well. Bernie did all the engineering, the mastering, the record pressing and distribution. If I did anything besides play drums on these two songs, it was to encourage Bernie and help him further develop them but that's about all.

These songs were recorded out in the farmhouse Bernie rented for several years - his only neighbors were the couple who worked the farm and lived in the doublewide and they never complained, although they certainly shot us some furtive looks of concern after some particularily psychotic set or outburst. It was the type of place where after banging out songs and making an incredible racket for hours on end, you'd look out the window and there was a cow looking batch at you chewing the cud nonchalantly. Late at night, you got the near silence that you only get out in the country and near dusk that wierd fog that would rise from the fields. So, we'd get together for the occasional weekend -- when we weren't playing, we'd spend the time listening to shit like Wake of the Flood-era Dead to The Swans to Talking Heads '77 to Sonic Youth to... well, I think one of Bernie's hippy friends even came in once and slapped Edie and the Bohemians on. The cover was, I think, inspired by those two Happy Flowers 7 inchers. The end result was a sort of psyche-punk-farm-noise done lo-fi; tryin' to be more hi-fi.

"I Won't Hurt You" in my mind a song about the opposite -- a sort of Big Black (another band on our playlist) character study of the guy who talks all soothing in that Kim Gordon seductive velvety voice but by the time the tarantella kicks into full gear (my high school summers playing for an Italian wedding band helped here), he's revealed to be just another garden variety 'fidget' (to use the NYPD Blue term) molester. One of the neat things Bernie did here was to add that wall of guitar near the end and pretty much bury his vocals under the din.

Bernie may disagree with this intrepretation (since he wrote the song) but "Moreau" kinda concatenates the Minutemen question of "What Makes a Man Start Fires?" to just "What Makes a Man?" But rather than write a Minutemen song to accompany it, we did more of a treble-peaking hippy drone thing. For no reason, I started hitting the woodblock in the middle of the cut and then thought better of it. I wanted to record it over but then said it just adds to the wierdness of it - the idea was to make the drums just an extended freakout anyway. This was years before the Brando-Kilmer cult classic film, so dont get any ideas that this was just a pop culture song.

So since I guess I own something of these songs, it's a "legal" download unless Bernie objects. I'll try to keep these up longer but I have a lot of stuff to post this week so may be taking previous songs down sooner in case you haven't caught up on the past few posts.

Links:
My previous posting on the Bikermutt post-breakup cassette

Insomniac blogging tonight - some cool updates to my clipshack page on Iggy and Suzy Quatro and Aimee if yer up as well
Posted by Jim H at 2:03 AM

Nice post. Your mention of the Happy Flowers brought back memories. I went onto google to see what Mr. Anus & Mr. Horribly-Charred-Infant have been up to and found this. Their schtick was certainly better enjoyed in 7 inches than 12, methinks.

I have their first two 7 inches (in fact, one of them is number 2 of the first pressing) and interviewed them for my fanzine. It was a great interview, if I find it I'll have to scan it in and post it sometime.