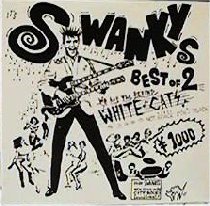 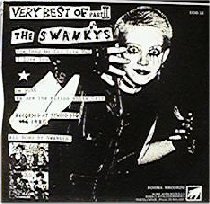 Does anyone still like Japanese Hardcore punk? For awhile there, it was very hot and importers couldn't sell enough of it. Invariably, it was so expensive that you ended up making or trading tapes of it with others but that was besides the point. I've got a ton of those tapes but many of them are undocumented because, also invariably, people never wrote down the songs properly on the cassette jackets. Shades of ID3 today.

I think the attraction of Japcore, as it was called, was that it was loud, noisy, uncompromising, idealistic and so unintelligible that the self-appointed lyrics police couldn't keep up with it. The Japanese musicians also had no shame about sticking to the old-style fashions (spiked hair, leather jackets) that had become so cliche that only the posers arrived dressed for punk (we're talking late '80s, early 90s). It was kinda endearing to see kids dressed like we did 5, 8 years prior - like going to a Halloween show.

So said, The Swankys were one of the more popular punk bands in Japan - kind of on the light side compared to the (much better) The Stalin or Execute . On the other hand, they weren't dogmatic (even though their record label was named Dogma). They were originally called GAI and were more a straight hardcore band but decided to change their name and branch out. They reportedly had no compunctions about doing a few songs in other styles such as "classic punk" or late 60's garage-punk. Yet, if this record is proof, they still kept that Japcore feel.

This four-songer came out in '85 though I probably picked it up from the late great Systematic mailorder company in the late '80s. Opening song "How Long Do You Give Me?" does the old-school punk thing. "I Love You" is more in line with their contemporaries but slowed down. "I'm Punk" is a standard Japcore but its compromised by a rather lame guitar break. "We Are the Rifind White Cats" is another style - it reminds me a little of Grisen Stryker, the Finn punkers I wrote about last year - more of a noisy snotty cacophony although again, its hampered by a weak guitar lead.

Bottom line, for all the money, I paid for this, it was disappointing. Some of the songs are promising but they should have never let the guitarist take a solo. About the only decent song is "How Long Do You Give Me?" I'll save "I Love You" for next year's Valentine's day.

Where are they now? I dunno. The band broke up.... faded away. I've seen their album Never Can Eat Swank Dinner on a couple classic punk faves list. There was a rumor going through the Jap forum-o-sphere earlier this year that they were getting back together.

Links:
Swankys Discography (I borrowed the JPEGs from here)
A Swankys Tribute Site in English with some MP3 samples
Posted by Jim H at 9:22 PM

Thanks for commenting in my mp3 LiveJournal. I replied to your comment there. Thanks also for pointing me to your blog; I really like the concept behind yours.

Actually they were originally The Swankys THEN Gai then back to the Swankys.