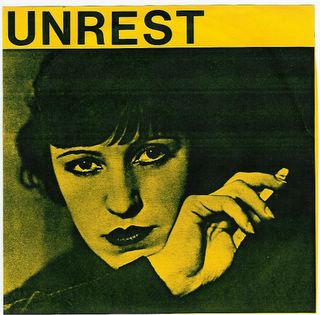 "Huh? Oh, that's Unrest. Big indie band in the early '90s. I bought that directly from Mark Robinson standing out in the street outside DC Space one night back in the '80s. Or was it Phil?"

"Noooo. I have their Imperial whatever CD. I know who Unrest is. I mean who's THIS" (pointing at the cover)

"I've seen this photograph before."

"Yeah, I'm not surprised. It's a pretty famous photograph. Lotte was Kurt Weill's wife in the '20s in Berlin. Weill wrote parts for her to sing but she was really an actress - "Mack the Knife" was written for her. They divorced but ended up fleeing Berlin together when the Nazis started breathing down their necks for being communists."

"Yeah. I guess if you erase the whole later history of communism but well, um, I suppose back then it was romantic going up against the Nazis. Anyway, they fled to Paris and then later to the US. She, um, remarried him and remained devoted to him after he died. She later oversaw a revival of his music, set up a foundation - and you know the whole 'Mack the Knife' thing."

"Wow. So what's she doing on an Unrest record?"

"I... they were high school kids. I guess they identified with the romanticism of the '20s. It was a decade very much like the '80s. Or maybe Mark Robinson just fetishized her face. All of his album covers were retro and the early ones were iconic as well... Its actually a pretty valuable record - there were only 500 printed, I think."

"I dunno. You know I've never been very careful with my records. I was...just... looking at it. I mean, its a bit of a puzzle of a record."

"Well, it's a 7" - most 7"s, hell, most LPs aren't really attempting to be an artistic statement. But this is. Usually 7"s are just about selling a song or drumming up interest for an LP. But this one... it seems more like a mini-concept LP - its pretty extraordinary for a bunch of high school sophomores. I mean, I've been to museums that are featuring the "best" of high school art and its rarely as original as this. For instance, start with Lotte Lenya and Kurt Weill - an artistic couple who did some wonderful things in the '20s, at least in retrospect... and then consider that one of the songs is an instrumental called "Scott and Zelda". They were also a leading artistic and intellectual couple in the '20s. They were idolized, though, like perhaps some idolize Jessica and Nick these days."

"Well, the record starts out with an cover of "So You Want to Be a Rock and Roll Star" - they're kind of over-reaching but its still a pretty bracing take on the song. But why, that choice of a song? The only thing I can think of is that they are being ironic. Scott & Zelda and Kurt & Lotte were the rock stars of their time. They owned the '20s. Just compare, say, Eddy Van Halen and Valerie Bertinelli, who were like the most admired couple then, at least in MTV rock and roll circles. They pale against Scott and Zelda. I mean Zelda was an artist and not a bad writer herself. They hung out with Hemingway. Val Bertinelli's leading artistic contribution was the TV Movie of the Week. They hung out with David Lee Roth. And Eddy may have been a virtuoso on guitar but he wrote mindless songs like "Jump" and "Hot for Teacher" - hardly The Great Gatsby or Babylon Revisited. With Unrest there's a kind of a longing for that type of relationship or time - yeah, its kinda adolescent but don't we all want some great story, some great connection like that in our lives. In the '80s, that was all perverted into just pure brainless MTV glamour. Hell, we haven't even mentioned Tommy Lee and Heather... or even Madonna and Sean"

"Only one of F. Scott's best short stories. It's set in Paris but about an American alcoholic who tries to be something that he's not to win access to his daughter. Despite his best intentions, he can't escape his past. It was a common theme of Fitzgerald's books - being something that you are not, living as an outsider, not fitting in. I guess from a high schooler who was into King Crimson, the Dead Kennedies and Henry Cow -"

"Oh come on, you said you knew who Unrest was. That's where they got their name -- from a Henry Cow album in the '70s."

"Well, it was a name for a group. Fred Frith was in it - very progressive arty stuff - they managed to get a major label contract but always had a "do it yourself" vibe, like much of the indie music of that time. You can hear the guitarist on this record, Robinson, try to get some of Frith's chops down. He's also wants to be Robert Fripp. He's not that good yet but its kinda exciting that they tried. This was...I mean I dunno, it's an instrumental so you can't really say what its about but they named it after F. Scott Fitzgerald and his wife Zelda so they must have been thinking of something..."

"Well, you asked the question."

"Um, I dunno. Its an instrumental but with these buried vocals and just some gut-wrenching drumming by Mark Robinson mixed with two ethereal synthesizers. It sounds like some of the stuff that's come out over the past few years like that new Low but reimagined as a Kraut- rock band. The cymbal crashes are recorded purposely to over-modulate and it makes for a stunning effect. It's really the best cut on the record. The recording is fantastic - it sounds unlike anything you heard from Dischord in that timeframe and perhaps that was intentional to kind of distance their band from that scene, even though they obviously respected it.

What's it about? I'm not sure. Hills are obstacles, although not insurmountable. I don't want to read too much into it but the liner notes reference Nelson Mandela who was still in prison at the time. Maybe the record is making a point that while the sense of romanticism of the '20s is gone, we still have similar troubles plaguing us - Babylonia but without Scott and Zelda. But we did have rock, or at least the rock that was coming out on the indies..."

"Pretty deep for a 7" by a bunch of high-schoolers"

The contents of this 7" EP were later compiled by Matador Records in a CD called Fuck Pussy Galore and All Her Friends. It is out of print although I wouldn't be surprised if it gets re-released in the near future.

20 years ago this past Wednesday, Unrest first got together. Happy 20th Birthday, Unrest!

Tonight, weather permitting, they are playing together for the first time in 11 years.

Well, actually Val and Eddy didn't hang out much with Diamond Dave but they did hang out with that fat guy who played bass.

Nice cut - but it sounds best on headphones.

hey just curious, but what are you doing with all of your records as you transfer them? are you selling anything?

and thanks for the tracks.

It never would've occurred to me at the time but listening to The Hill now, and factoring in Unrest's Factory Tribute EP on Sub Pop, it's striking how much this resembles a low-budget Factory homage (esp. that bass!)

I love the Lotte Lenya! Thanks!