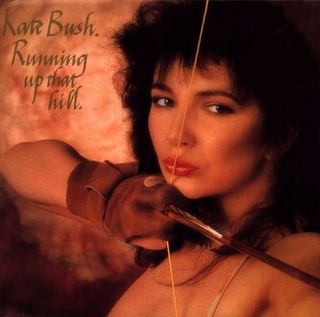 Ms. Bush's big hit in the U.S. was "Running Up That Hill" and for a short time, you heard it everywhere. This was the dance single she produced to accompany the album Hounds of Love and its actually quite good even if you never bought into rest of her New Age Art Chick schtick. It's the only record, I swear, I own of hers and I think it was more an impulse buy or because someone I knew was constantly raving about her. I remember years later having a beer in my favorite bar in San Diego and the guy who always came in an put the funk and R&B tunes on the Juke stuck this song on. I raised my eyebrow at him and he said, "shit, its got soul and she don't even know it." (see below, Big Boi thinks she's all that, too).

And it is a very lush, unself-conciously over-produced, big beat track so emblematic of the 70's and the 80's. Sure, it's a pretty silly song which everyone but Kate herself seems to draw deep meanings from - short explanation: it's about someone confused about their inability to communicate with their lover... that said, it has so many neat elements to it -- the building strings, the odd synth horn hook, David Gilmour's atypical scorching guitar break and his sub-hook, the choo-choo train - Indian drum beat, even the shuddering climax as she sings "Let's exchange the experience". The 12" has a few "80's" elements I could do without - such as the electronic drum counterbeat and Prince scream near the end. That said, it just sounds like she had a blast recording it. I'm pretty sure it produced one of those final listen/ headphones-in-the-studio moments that I've been lucky to have once or twice in my life (even if it was a much smaller, less capable studio than I'm sure she is accustomed to).

"Under The Ivy" is on the b-side along with an instrumental version of "Running". This song probably could have used a lyrics scrub - I mean when she starts singing about "this little girl inside me/ is retreating to her favorite place", I feel dry heaves coming on. On the other hand, it has her typical meticulous production and you can't argue with the way the organ rises up out of nowhere like a hand coming out of the dark to stroke your face. It was reportedly produced in an afternoon and she didn't include it on the Hounds of Love LP although it later made its way onto the "extended CD import".

Despite the songs flaws and maybe because of its obscurity, it only stirred her rapid fans into an even more frothy broth than usual. Subsequently, it produced one of the most hilariously unintentionally embarrassing fanzine interview moments in history.

The text in italics is actually the interviewer, who I knew but shall remain nameless, who seems to have more to say than his interview subject. I can imagine Kate looking nervously at the bodyguard and inching backwards ever so slightly during her answer:

Interviewer: I read an interview where the interviewer asked you if `` running up that hill'' is about the contemplation of suicide. And I thought that was pretty amusing, because it seemed to me clearly not to about any such thing at all. On the other hand, strangely enough, that's just what "under the ivy'' seems to be about to me. The tone of the song is very, very sad. And it seems to be about longing for the lost innocence of youth - perhaps a follow-up to "in search of peter pan'' a white rose is a strong image in the song. And it could be a symbol for friendship or innocence, but it could also be a symbol for death. You sing ``away from the party", and it seems like you might almost mean ``away from the problems and triviality of modern day life'' You sing "it wouldn't take me long to tell you how to find it", and it seems like you might almost be addressing death itself. You mention a secret, but never mention what it is. Could it be the taboo we have of suicide? What are your feelings about this interpretation, and what were your intentions with the song?

Bush: Well, I think... uh, it... perhaps you are reading much more into it than was originally intended when I wrote it. It's very much a song about someone who is sneaking away from a party to meet someone elusively, secretly, and to possibly make love with them, or just to communicate, but it's secret, and it's something they used to do and that they won't be able to do again. It's about a nostalgic, revisited moment.

Is there any reason why it's so sad?

I think it's sad because it's about someone who is recalling a moment when perhaps they used to do it when they were innocent and when they were children, and it's something that they're having to sneak away to do privately now as adults. (1985, Love-Hounds)


Don't worry. I'm not one of them. This is the only Kate Bush music I currently own.

Special disclaimer: For educational and discussion purposes only. Cuts are taken from vinyl with all its flaws so please don't complain. If you want the real thing, go buy the CD (see below) or the LP. This cut is not available on iTunes. Cuts are available for download for a very short period of time.

"She was so bugged out man! But I felt what she was talking about in the songs. MOTHER STANDS FOR COMFORT, RUNNING UP THAT HILL. My uncle would explain what the songs stood for. Like THE MAN WITH THE CHILD IN HIS EYES and all that s***.

He wants her to produce his next album.
Posted by Jim H at 8:06 PM

Wow...I had this 12" myself...lost it during my mother's vinyl purge via a garage sale while I was in the Army. Along with hundreds of other now-rare 12'ers. Thanks, mom.

And thank you for "Under the Ivy". I completely forgot about that song. And how funny you picked that this week to post. Keep checking my site later this week for details why (he said ominously).

Don't worry, it has nothing to do with Kate.

I must say that I am a proud Kate Bush fan, although I don't have Hounds of Love. Her first several albums are really wonderful.

Here's the weird thing--I don't listen to her all that often, but right before I read your post, I had just put on her first album....

Btw, the mp3 thing on Unfinished Novellas is new as of last week. I'm quite excited to be a part of the brotherhood.

It’s funny, about two weeks Bush’s The Hounds of Love single went into heavy play rotation at the Starbucks I stop at in the morning. I was ordering my coffee, when I heard the distinctive male voiceover, “It’s in the trees, it’s coming!” The two baristas in their late teens looked at one another in puzzlement, and the one said, “Who the hell is this?” The other one shrugged. I told them it was Kate Bush, and I might as well have said it was Laura Bush, ‘cause it was not ringing any bells. For the rest of the day, I could not get those barking sounds out of my head.

I have to agree; there is some element of media hype and stealth marketing afoot.

i have the Kate Bush album right now... plus I have the MARBLE Hounds of Love album..... My Mom bought it when she was young, and now I own it because she gave them to me.... she was a Kate Bush fan and now I am..... I ALSO have (not to brag or anything) the rare covered version of the Kick Inside...... And to think, I could be rich at 12 years old!!