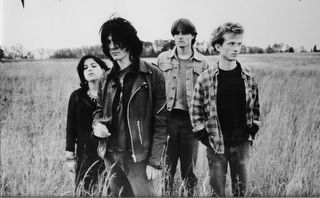 I'm wallowing in the mire of misery
Situation's hopeless, I know that's true
There's only one thing left
That I did not do

One band that was criminally overlooked in Our Band Could Be Your Life had to have been Pussy Galore. I think they get, like, one mention. The band has always confounded politically correct rock writers and scenesters who find it hard to believe that a bunch of upper-middle class brats could put together such an impressive truckload of noise-rock in such a short period of time. Christgau dismisses them: "All these postdadaists want is to provide the forbidden visceral thrill of rock and roll at the moment they snatch it away as an impossible fake--to be the-thing and not-the-thing simultaneously" and for once, ironically, he's right.

Although their original motivations in moving to Washington DC are unknown (was it to participate in the exploding music scene? or was it just to mooch off of Julia's well-off family?) by early '86, Pussy Galore seemed all to eager to chomp on the corpse of 1985's Revolution Summer, which as Julia Cafritz later taunted from her safe perch in New York City: "Where are they now? Just as soon as the interviews come out, they've already broken up." (She was wrong as the scene re-emerged the following year). But, hey, its 1986 and if it gets you an interview in Conflict, then go with it? I mean, you're some scene dink, so how do you go to a show in DC if your fanzine just ran an ad by a band that sings "Fuck Ian MacKaye". And there were no explanations, no apologies and no backing down even if they had a lot of "Rambo Punks" get up in their faces. They compounded the provacation in this album with "You Look Like a Jew" a windy shitstorm of breaking glass
and taunts towards the DC's concentration camp chic of shaved heads, thrift store clothes and the "fear of offending Dischord". All the more confusing title and lyrics as Julia Cafritz's family are Jewish. 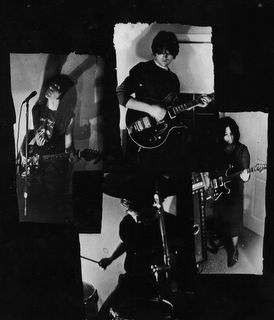 Then there was the "problem" of musicanship, or should I say in my best Ira Robbins sniff: "atrocious non-musicianship." Scarluffi calls it "sub-amateurish" The common belief was that these bunch of druggie rich kids (forget Neil Hagerty and his white trash girlfriend for a moment) were just a big joke and would go away if they were ignored. They're just picking up their guitars in between jet setting and Georgetown parties to get Mummsies and Daddy mad -- but not mad enough to cut off the trust fund or the maid service. The truth was that the best rock and roll was done by people who could barely play their instruments and came from all stratas of class... Jon Spencer (a straight-edger according to Hagerty) had a distinctive vision and knew exactly what he wanted to do even if the others were confused at times (evidence: his follow-on band Blues Explosion is doing exactly the same thing to the blues). Robbins (and others) further asserts that this was a "one-take no-rehearsal guitar-army tossoff." He couldn't be further from the truth. Barrett Jones, then a struggling recording engineer (later producing Foo Fighters) described the experience:

When the band's beat-up van pulled up to the curb sputtering and spewing thick gray smoke, and three guys and a girl wearing black leather spilled out, Jones was a little unsure of what he had gotten himself into. He'd only recorded a few times before, and as a result, offered extremely cheap rates--in this case, $150 for four complete songs. Those four songs ended up taking four hellish days.

First, Spencer was never happy with the takes. "He'd say, 'That sounds too good--make it sound worse,'" Jones remembers. ... And Pussy Galore loved noise--loud, obnoxious noise. "God, I hated them for that," admits Jones.

To the chagrin of Jones' roommates, the band had a seemingly endless supply of noisemaking tools. They'd power up a rusty chainsaw for one song and hammer a steel oil drum on another. They broke glass and banged on sheet metal for hours. They also liked guitar feedback, and would spend forever perfecting just the right squeal.

While no way, now how, as good as some of their later stuff (Sugarshit Sharp EP is on iTunes and recommended as their best collection available), Groovy Hate Fuck contains several classic cuts and I don't mean that in the Journey/Yes/Styx sense. The irony is that while they may have served as inspiration for a generation of garage noise bands (Jesus Lizard springs to mind), almost all of the songs on Groovy could have been done 20 years prior and put out on Nuggets (that is, if the song lyrics and titles were cleaned up a bit). As many have noted, Spencer, who studied semiotics - the theory of symbols and how people glean meaning from words and sound and pictures - at Brown University - wanted to tear rock down to its core elements and rebuild in his own vision. Its a good thing Mark Anderson heard Rites of Spring first or he might have followed through on his supposed path to suicide. This vision was a dark self-hating/ everyone-hating vision and in marked contrast, seemingly, to the aspects of the Revolution Summer bands who wanted to use rock to unite and create a new "positive force." Its everything rock was intended to be - that is if you were around in 1969. Originally inspired by The Cramps themselves, the Revolution Summer bands were now using insular reference points and derided other bands outside their circle as "college rock". In Our Band Could Be Your Life, Fugazi go around town looking for places that sell tofu. Constrast this with an earlier lyric from their high school days: "We don't sit in circles/We don't meditate/we don't eat health food/cuz coke and Twinkies are great" and you can start to see why an opposition, albeit a glorious failure of an opposition, was formed. Spencer, too, went back to The Cramps but instead of making a beeline towards The Clash, he makes a screeching u-turn towards the Rolling Stones' Exile on Main Street and The Stooges' Fun House. Rock was dead - now it was time toto stomp on the grave and kill any punk rock stragglers. In fact, the cover of Groovy Hate Fuck (see picture above) suggests the opening scenes of Night of the Living Dead where the zombies emerge from the fields at dusk to begin their night of terror.

1986 saw this and five other releases by the band. Disgusted with the inability to get shows booked in DC, the band (minus the drummer) decamped to NYC where "all the critics love you" especially if you dress in black and make a ton of racket. The band continued in this vein, getting better and better at their instruments and the science of feedback. They released a lot more material and added Bob Bert and Cristina Martinez (later to marry Spencer). After their break-up, Neil Hagerty and his girlfriend went on to form Royal Trux - which continued in the Pussy Galore vein. He got a nasty heroin addiction, spent time in jail and is now in the Howling Hex (about to drop an album on Drag City). Jon Spencer, of course, went on to form the Jon Spencer Blues Explosion where he went about the same thankless job of "being the thing" in this case a blues band and "not being the thing" (in this case mocking the blues). They now just call themselves Blues Explosion, suggesting Spencer has reined in his infamous megalomania somewhat (perhaps a side effect of fatherhood or maybe just a grudging respect of his impressive bandmates). They are on Sanctuary Records (where rock stars go to die). Julia Cafritz reportedly lives in Northhampton, MA near her good friend (and Free Kitten bandmate) Kim Gordon. Drummer John Hammill's whereabouts unknown.

Ah fuck it. Writing about Pussy Galore is like getting in a tiny little dinghy and trying to sail around the world. Anyway, sorry if it sucked - I wrote four complete drafts and threw them all out. I even went over to Georgetown to look at the Shove records HQ during the '80s. See here. Quite a to-the-manor-born place.

Bottom line their music was great if you don't think about it and it just kept on getting better. I'm surprised it stood together for so long. They never sucked except when I saw them play live in front of a group of dour 930 Club hipsters.

So, anyway,I'm playing to night - a "Cabaret" but alas Liza won't be there. It's a snare drum and highhat and brushes gig. I get to wear all black.

Kinda like Low except without the tom-tom and cymbal and plus the hi-hat and we don't play cool songs. Uh-huh.

Piano player's name is Vic. He's a Reverend on Sundays. Geetarist is Tony. He wears hats and thinks he looks hip in them. He's also, like most guitarists, an incessant noodler. Luckily, I never had to sit through a rehearsal (kept on getting "sick" and why should drummers rehearse anyway?) and he keeps a lid on it when he's on stage.

I should have added the standard disclaimer: Standard Disclaimer.

These songs appeared on a 1992 Corpse Love compilation of early Pussy G. put out by the now defunct (I believe) Caroline. Amazon still has a few for sale if you vant 'em. Expect Spencer to re-release them anyway and I expect the control freak to send me a C&D any minute now.

And you know what else - what's so wrong about "forbidden visceral thrills?"..,

A couple lyrical corrections, from a real control freak:

"When everything is so dark
You cannot see
Wallowing in the mire of misery
Your situation's hopeless, ya know it's true
There's only one thing left now
Left for you to do..."

Great post, by the way. (Complete with stalker photo.) It's nice to have my memories validated. Hey, I guess I really was there!

I just re-read this and wanted to note that I sort of ran into original PG drummer Hammill last August at a Mexican restaurant in Silver Spring with his wife. I didn't know him but my dinner companion did and went up and introduced us. He is apparently living the "normal" life of a 9 to 5er.

One thing I never quite did get was why "You Look Like A Jew" was always interpreted as some sort of anti-semitic statement. I always assumed the song to be about someone (probably Spencer) who is falsely accused of bein' a Jew on the basis of their looks.

My girlfriend has heard "You Look Like A Jew" (she suffers from The Jewish Problem, ie schnoz city) from actual, honest-to-Elohim Jewish people. No one called the JDL.

Anyway, even if they were just pissing people off... this band is genius.

Oh, the song is about that whole Dischord, earnest young men in shaved heads thing?

Maaaaaaaaaan, that tells you how much I care about the "DC scene". I remember being at a party and some straightedge punk kid who was there was gabbing on and on about how he had "really gotten to know Ian Mackey" after having talked to him for five minutes in a piss stall somewhere. Luckily I was drunk, so I was without The Fear, I reached over and grabbed his dicknballs and said "Yup. That's about right."

(Though, with hindsight, "You Look A Jew" would have been much more appropriate.")

"Asshole. I have a lot of time on my hands." --That's the human condition right there, folks.

that music is so awesome! can you post some more songs by Pussy Galore??

Sugarshit Sharp better than Groovy Hate Fuck? No. No. Fuck!

I think I need to give y'all a cavity search lol