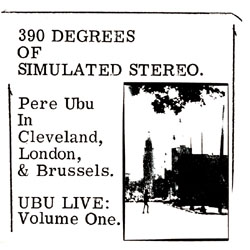 In the early '80s, Pere Ubu (or as they called the collective: Ubu Communex) decided to put out three albums of curated live material. They gathered tapes from fans, soundboards, radio and their own personal tapes. Volume 1 covers the early years (including the 1st incarnation with Peter Laughner) and work from the first singles, the Datapanik EP and The Modern Dance (reviewed here several days ago). By the nature of the title (Mercator projections are generally displayed as 390 degrees), the band is also displaying pride of its quickly earned world-wide fame and this includes recordings from England and Belgium, the latter even includes a radio recording ("Street Waves") that was "reportedly broadcast on Belgian radio", quite a feat for an underground American band at the time (1978).

The LP packs as much possible - I estimated around 50 minutes which was pushing the limits on a 12" vinyl. But the record was criticized for including some tracks of very low quality. These include the very early tracks which were recorded on a portable cassette machine and a few others. These tracks while unlistenable to all but the most devoted fan provide some historical context. The surreal "30 Seconds Over Tokyo," arguably one of Pere Ubu's most important songs (although its technically a cover of the Rocket From the Tombs songs) and a milestone in underground rock is unfortunately marred by a bad recording here. You can hear how brilliant the song is and that it must have been even more incredible live but your better bet lies with the 2000 release, The Shape of Things, an recording with the 1st line-up which while not perfect documents the song live much better. I believe they are also using a gong in this recording or maybe my ears are playing tricks on me. Fortunately, "My Dark Ages" (the b-side to the "Street Waves" single) has a similar forboding atmospheric feel to "30 Seconds" and that will have to serve as a substitute for that style of Ubu, at least for this collection. There is also an early recording of "Humor Me" which sounds like it was very different than what eventually got recorded in The Modern Dance. The Laughner stuff is all pretty poor in sound quality but you can hear some of his brilliant guitar work and even his backup singing.

That said, more than half of this album is salvageable and also provides some interesting insights not to mention listenable songs. For instance, the use of synthesizer and overlaid guitar feedback in the beginning of "Non-Alignment Pact" is pretty monumental for its place and time and in fact the prominence of the EML synthesizer throughout where it is used not as a cheap mimic of an instrument but as an instrument unto itself. "Street Waves" here sounds very much like the Velvet Underground's "Foggy Notion", which was certainly circulating around that time as a bootleg (later to appear in the late 80s on VU). The influence of Hawkwind and Can are heard throughout in the instrumental breaks (where Thomas reportedly would go into theatrics) and you can even surmise that Aoxomoxoa-era Grateful Dead was played in The Plaza (the apartment house where many of the Ubu musicians lived in the '70s).

This record is out of print but as noted above, some early live Ubu is available on The Shape of Things (also available on iTunes). Some of the 390 Degrees cuts are on this album and appear to have been cleaned up as much as possible.

- Pere Ubu's FAQ from their first website addresses the issue of poor sound quality in 390 Degrees. It was an artistic decision!:

If you look at the back of 390 DEGREES OF SIMULATED STEREO you'll see the recording device for each song is listed: "portable cassette machine," "one channel of a Braun reel-to-reel," etc. We listened to all the tapes we had: cassettes, 24-track mobile recordings, professional and amateur. The "lo fi" recordings almost always sounded better to us that the "hi fi" recordings. The ambiance and distortion and accidental nature of lo fi more accurately portrayed the material as played live and the band as experienced live.

A band on stage is an entirely different experience for the musician as well as the listener. Recording a band live is not simply a matter of transforming the concert venue into a studio. It doesn't work. At least it doesn't work for us. On stage, for example, I usually can't hear the synthesizer. I know what it's supposed to be doing. I trust that it is. I can't hear it. The bass is too loud and everything I sing is drifting in and out of an incredible soup of overtone and noise. You as a listener are getting a mix of what we think we're playing as interpreted by our sound man who is usually located in the worst acoustical location in the venue compensating for what he thinks the overhang of the balcony might be doing to the lower mids and how the lousy cross-over in the left bank of speakers might be affecting the upper end on the other side of the room. And there you are standing in the part of the venue that pushes the high end and your girlfriend is tired and wants to go home and people are talking and you're thinking about... And it goes on and on.

We decided that live albums should sound like 390 DEGREES because that's what the live experience is. It's my favorite musical experience and it's my favorite sound. And, of all the tapes, we liked those the best.

- Also from their old site, the UBU story includes some of the early history
- The EML synthesizer was used by several of the Ubu synth-ists (?) - most prominently Allen Ravenstine - and had its own unique sound. The company that made it discontinued the line and went into military satellite parts production. Here's a history and a picture of the EML from the Synthesizer Museum
- Last year's Rocket Redux features a re-recording of "30 Seconds" with surviving Rocket from the Tombs members Ubu's David Thomas, Craig Bell and Cheetah Chrome that while not a very gonzo version, brings the song back to the Tombs' more Stoogey roots.

Sing along to the live version of "Dark Ages" (from the UBU Projex webpage):

My dark ages (I don't get around).

I have to chip in and say that you are on one hell of a roll....
The posts over the last few weeks have all been nothing short of brilliant....
(might have tied in with the lick of paint you gave it in here...?)
Where the hell do you find the time for it...
Loving all the tracks, sorry I should really comment more.

Keep it up Sir.
Great stuff.

Just thought that that might sound like your previous posts were rubbish....
That's not the case.
Sorry if it came across that way.

This album is available in mp3 : here.
Enjoy !