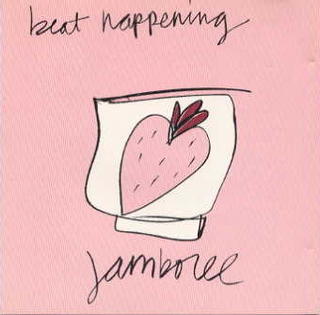 What's not already been written about this record and this band that you don't already know? This is the second "album" (more like an EP) and its the time and place where Beat Happening documented that they could really rock and write engaging songs about teenage love, food and sex. Yeah, I slammed them for their earlier stuff but those tapes and records were necessary steps for finding their voice (and with this, perhaps the apex of their swing - although others my argue that Dark Candy and their last record were better). The point of the band had by this time become what Calvin sings in the final cut: "We tip over apple carts / with the pounding of our hearts."

And wasn't one of the wierder moments documented in Azerrad's book the description of how during a show which Beat Happening shared with Black Flag, Calvin's on-stage antics so offended Henry Rollins (reportedly) that he physically attacked him (well, grabbed at his crotch if you believe it). Now, some 20 years later, it doesn't sound so revolutionary but I remember getting goggled eyed when Heather did her a capella thing, off-key, with all her vulnerability when it seemed if a girl was playing in a "punk band" she mostly acted/dressed like a guy or an angry lesbian in shorts and hiking boots. Of course a week later, it seemed every other band playing at d.c. space had a tiny girl, a guitar and a snare drum. I too thought Calvin was a bit too much to take as well but now realize it was like a clean Iggy Pop act. I remember turning towards my companion and just rolling my eyes when he did his belly button baring.

What makes this record work is that the "Calvin songs" are interspersed with some more diverse cuts. I'm not sure I could have taken a whole record of his off-key voice or the feedback guitar and drums pairings. Sure, there's the songs sung by Heather (both about uncommunicative boyfriends) and the live cuts - the a capella "Ask Me" and the Hendrix meets Jad Fair "The This Many Boyfriend Club"... there's even a song that adds a second stereo-mixed guitar (courtesy Screaming Trees' Lee Conner) in "Midnight A Go-Go". All great stuff.

But what about "Hangman", the Crampsish murder ballad about what sounds like some Western comic book character meting out God's justice and going home at night to hang out with the kids and wife. And it rocks (but then so does almost 80% of this album). Here's a song I wish Johnny Cash had lived to cover and it makes absolutely no sense being on this album with the other songs here. And maybe that's why I like it so much. Although I find it hard to believe that Johnson ruled Olympia's music scene with the iron fist that is reputed, writing a song about a guy who tells people to "make peace with yourself" because they're going to hang at dawn doesn't do much to dispel those stories. "I'm the hangman." And no onions in that pot-luck casserole, please.

"Cat Walk" is another new fave and it has, oh my, backing vocals. This is the only cut produced by Patrick Maley (the undersung owner of Yo Yo studios and recordings). Unlike Steve Fisk's glorification of the guitar and upfront vocals (listen to "Bewitched" below for a perfect example), Maley softens and blends their sound somewhat and gives it a crisper pop feel. I wonder if there are any other surviving cuts from this session at Yo-Yo or whether this was the only one. Bonus points for being a song about a sweater (see Bellafea and Yo La Tengo, for starters).

About the only song I can't hack from this record is "Jamboree" - it's total nonsense and virtually unlistenable - at least after the first time. 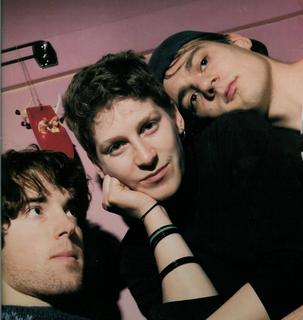 Photo credit: Ann Culbertson (from the back cover)

Calvin as Iggy Pop? Please. As if Iggy spent his life lying on his bed reading Teen Beat magazines and baking apple pies.

I think you need to have witnessed BH live in front of an audience of non-believers to appreciate quite how confrontational Calvin actually was...

In fact their whole rep is unfairly one-dimensional - how many other "twee" bands would dare write a song whose music literally consisted of one sustained note of feedback?! If Sonic Youth had had a similar brainwave, it would be cited in every article about them until the end of time.

Jim - how could you not mention Indian Summer, surely their zenith?!

Yes, I saw BH in DC Space surrounded by a crowd of friends and admirers.

I was perhaps one of the most skeptical people there.

I do agree the "twee" label is so wrong. For a band that spawned so many genres and sub-genres, its hard to think of them as just twee.

In a earlier draft I mentioned "Indian Summer" as an example of a "Calvin song" but somewhere along the line it got dropped. In a way, though, I have heard the song so many times (and at least two cover versions) that it really wasn't as exciting as rediscovering "Hangman" "Cat Walk" and even "Drive Car Girl"... songs I had basically forgotten about or ignored the first, second and third times out.

I meant to also say that although it contains the incredible Ponytail, Black Candy was overall a bit of a let-down to me. But apart from that, their records just got better and better, which is always the hallmark of a band that knows what it's doing.

Mind you, that recent round-up of non-LP fodder (Music to Climb the Apple Tree By) is probably my favourite of the lot.

Re your suggestion that Johnny Cash should have covered Hangman, BH later directly quoted Johnny Cash in Revolution Come and Gone so I suspect that earlier confluence wasn't *entirely* coincidental!