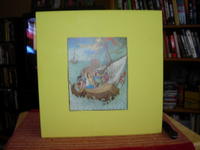 Blackhouse were a 2nd generation industrial band whose influences were drawn from Throbbing Gristle, SPK, Einsturzende Neubauten and the like. Their sound is somewhat derivative of Whitehouse, SPK, Nurse With Wound and Controlled Bleeding... only much more boring, if that's possible. This was in the years before industrial music became just another form of dance music.

The basic construction of the pieces on this record are to choose a repetitive single measure drum beat (they've got a Roland but don't know how to program it) and then lay some overly processed vocals over the top and some repetitive factory or feedbackish sound effects. An "exciting" variation would be to either not use the drum machine or just set the drum machine to make a single monotonous beat. Sometimes the vocals are discernible and other times you can understand them. I'm sorry but I'm nodding off even as I write this...

Blackhouse had a gimmick that made them stand out from the others, though. They were the first Christian industrial-noise-rock band. Whoopee. However, they disavowed the extremist fundamentalism that appears to be the logical conclusion of most religion and instead characterized themselves as good leftist Christians (pro-environment, anti-government, anti-war, anti-death penalty).

They were "pro-life" (there's a cut on this record by that name) but simultaneously said they were for the "right of a woman to choose her own destiny" (quoted from a 1993 interview) .... um... where destiny is spelled (whispering) H-E-L-L in case you're wondering. So its sort of like a strangely passive Christianity - a go forth and make a joyful noise and oh by the way - we think that you, you and you are going to Hell and tough shit. Oh by the way, we're not going to Hell because we both have dicks and would never get ourselves in a stupid mess like you. Dumb girls. Dude, let's party!

They're kinda like the Church Lady but with heavy feedback and a four track recorder.

I mean at least a band like Nurse With Woulnd would try to make the sounds of a million dead babies crying or something interesting and come up with something that actually confronted the audience. When Blackhouse got shit at live shows from both the Xtians who didn't like noise and the noise fans who didn't like Christians, they just stopped playing live. Well, at least they're going to heaven.

Praise the Lord and pass the drum machine!

Record collector geek notes: This is a limited edition reissue of 500 with a different cover for each. It looks like they took some religious art books and a pot of paste and afixed them to blank cardboard record sleeves. Mine has a bunch of people in a boat and the Pope has magically appeared and appears afixed to the mast of the ship. It's quite funny when you look at it - the first Pope on a stick.

Not to be confused with IVOR Cutler, who is a genius.

This may be in interesting review, but it's too ironical and self indulgent to be one... second wave of industrial music, is a very intensive, sincere and full of charm ... Blackhouse was part of this and is a legend... who cares they only use 4 tracks channel, a synth Roland they doesn't know how to play, etc... it wasn't synthy wave, and black humour in disguise...