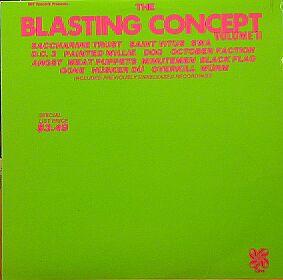 For some reason, this record has become a punchline. Andrew Earles (Failed Pilot) calls it the product of "the whims of a misguided label mogul." A recent review in The Record Robot, an otherwise fine endeavor, called (nearly) every song "poo" and "uninspired." Rock writers. Feh. This record reminds me of those old cheap Warner Brothers compilations except the artists didn't totally suck. Blasting Concept Vol 1 is not recommended, though, but this record has some previously unreleased material and is a fine doc. of the SST sound in the mid 80's, a pastiche of punk, metal, improv, acid rock and even, heaven forbid, jangle.

Sure, not every cut on this famously $3.49 LP is stellar. With the exception of Overkill's shredful Moto:rhead tribute, the metal cuts (from Saint Vitus and Wurm) are fairly vapid and boring for my taste. DC3, a band I never much cared for, cover friggin' Mountain, one of the most over-rated under-rated bands from the 60's (or was it the 70's, dude?). The SWA cut is pretty dick deadening. And my opinion that Saccharine Trust and Tom Troccoli's Dog are projects best forgotten finds no conflicting evidence here.

But Painted Willie's unintentional(?) political hardcore punk Spinal Tap act always makes me laugh and I can never get enough Angst (both the band and the real thing).

The Meat Puppets take on Muddy Waters may be "uninspired" and "painful" but wasn't that the whole point - I love the call and answer sludge-lead guitar action and the sort of end of the night feel that goes against the whole notion of the song they are covering ("I Just Wanna Make Love To You") and I find it more interesting than that other classick rok band that covered it...

October Faction answers the question of "what if" Black Flag were free jazz with words by Bukowski with their "I Was Grotesque"...

And speaking of Black Flag, how about that "I Can Feel You" with Henry restrained, the Dez-Greg guitar work ? It was later put as the title cut on their final record in case you were still listening at that point (I was).

Minutemen do "Ain't Talking 'Bout Love" with their typical joyful smear and remind us yet again that d. boon was more than just a singer-songwriter but wielded a mean guitar. But Robot got it right on the Du cut (if you're quick about it you can still sample it their site).

Finally, the Gone cut "Watch The 'Tractor", a pre nu-metal instrumental if there ever was one, actually works when put on a compilation such as this. My only complaint about SST in this time period is too much testosterone - where are the chicks? (Kim Gordon and Kira not withstanding).

Wanna buy it? - try Froogle for some of the used record stores and e-Bay - this puppy is long out of print and gonna probably stay this way (note that some of the cuts from the more popular bands like Black Flag and Husker Du have shown up on other collections).
Posted by Jim H at 9:51 PM

Had to put my two cents in here... but what did you actually think of the DC3 track? Never cared for Mountain myself, but their version of "Theme From An Imaginary Western" is a KILLER!!

If you are an Angst fan, you must have "Neil Armstrong". Can you post it? Pleeze? -- jonhope

The Overkill contribution (Over the Edge) is one of the Top 10 SST moments. Official!

My comments on DC3 are in the post above - the Queen is not impressed (but I'll give it a fifth listen as I blew by Gone on the first couple passes).

I'll look for the Armstrong EP but it's not in the current box of vinyl joy & I don't have it digitized yet.

I'll have to post the Overkill track when I get home - I thought I was the only one who loved it...

As spotty as it was, this compilation was sort of a gateway drug into the whole SST scene for a lot of my friends back in the day.

Just seeing that retina-burning cover brings back so many memories of seeing it on various bedroom floors.

Thanks in advance for posting Over the Edge - I've got Triumph of the Will and can confirm it was a bit of a fluke... but WHAT a fluke!

I meant to say last time, are you *sure* Dez plays on I Can see You? It sounds more like In My Head-era Flag to me.

I'd have to listen to it again to check but I'm pretty sure that the Saccharine Trust effort is an off-cut from the improv Worldbroken LP (featuring a member of the stooges on bass) so it's hardly the ideal ST introduction, to put it mildly. But it's that sort of utter perversity that made SST such a fantastic label in its prime.

Re the packaging - it's tragic that Pettibon's sleevenotes and artwork never got used but at least they're immortalised on pp430-432 of Rock & the Pop Narcotic...

Yeah - I put a question mark after the Dez thing - after doing some googling, I guess this must have been Greg Ginn and "Dale Nixon" jamming - that is Ginn must have overlaid a second guitar on top of the riff.

I remember picking it up simply for the Husker Du track which seemed worth the $2.00 I paid used. I'm guessing this one (vol 2) was nothing but leftovers, right?

It probably feels that way because of the drab packaging but if Pettibon's notes and drawings had been used (see above), the whole record would seem *completely* different...

I really love the Minutemen's "Ain't Talkin' 'Bout Love", but it's just a cover, and not one of their classics.

It's a shame about Saccharine Trust. Jack Brewer was a nice guy but a horribly annoying "singer", and it made Joe Baiza's inspired guitar playing hard to access. Universal Congress Of was a great band because it had Joe and not Jack.

DC3 - "Theme From an Imaginary Western"
I have been looking for a copy of this song for YEARS!
I'm talking...YEARS!!
Anyone have other suggestions other than Ebay?
hit me up!!! PLEASE!!!!!
markcrosales@gmail.com

"Erase Today" is maybe one of the perfect Husker Du songs. I put it on every mix tape back when there were tapes, no email, no mp3s, and more time.

Hi. Nice blog. It is four years after the fact but I found this tape unopened in my mom's stack of cassettes years ago and opened it for the first time today on a 45 minute car drive and fell in love with it's weirdness after about two listens. I ended up playing Just Me by Angst about twenty times in a row back to back, I don't know exactly what it is about it but the track amazed me. Is there any way I can convince you, if you still have the file somewhere, to upload it again or e-mail it to me? I would be forever grateful because after searching for an hour I've concluded it is nowhere else on the internet. Shanks.
-NickiB! nbutler_07 at yahoo dot com
Like, maybe I'll show you my b00bs or something, really, that's how bad I want this song in .mp3 format.

This album is ok, but the original Blasting Concept is RAD! It has the best Black Flag, the best Minutemen, and the Wurm song is one of the punkest things of all times.

A member of the Stooges? Seriously?