Overkill (L.A.): "Over The Edge" - from Blasting Concept, Vol II 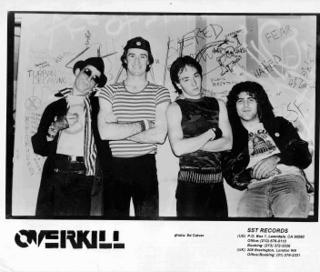 Due to special request and my own like of this song, here's the Hawthorne, CA band that Merrill Ward (SWA, Nig Heist) used to sing for before they kicked him out. That's Merrill on the far left - you could use this picture to play the old "one of the things doesn't belong with the other" game. The story is that he was asked to leave the group after he was overheard plotting how to take over the band - ha ha.

Merrill is now a New Age guru in case you need your chakras aligned.

Here's the Overkill (LA) reunion page - the two surviving members that got together earlier this year are guitarist Felice Lococo and drum bum Kurt Markham - there's a picture of them in case you want to do a before and after comparison (Felice aged, Kurt didn't - damn drummers).

They've posted a bunch of their best songs as MP3s. They have an upcoming gig on August 6th (with Instigator and Dr. Know) and more to come. They recently posted some new (albeit raw) practice session MP3s were recently posted. Age has not mellowed them out, at least I can say that.

"Over The Edge" from The Blasting Concept, Vol II

See also the Overkill (L.A.) audio web page to also download this song and others (for when my link goes dead).
Posted by Jim H at 6:04 PM

For more on what Merrill is doing (and the source of the picture you link to) go here and scroll to the bottom of the page. He always was a hoot.

LOL, I guess the hair loss attributes to my aging. Not to mention the BS from Family I've put up for 20 something years, about my love of music. BTW, Kurt and I were not the founding members. Joe Gurule was the one who had an idea to put the band together originally with Kurt. Then Ron was asked to join, followed my Geoff, Merrill, and then me. Thanx for the write up.

Felice - Thanks for the correction - I should have read the bio more carefully...

Scott Kidd here, the butt-rock singer that replaced Merrill in 83. I'm now doing radio at Classic Rocker KISM in Washington. Check my webpage www.scotthammond.com for bio, audio and pics. I'm looking for ex-members Felice, Ron and Kurt if anybody can hook me up. Also looking for the long lost video of us performing at Mi Casita! Anybody with info please pass it on at the link on my webpage. And thanks for calling me a skinny butt rocker. I couldn't have said it better myself!