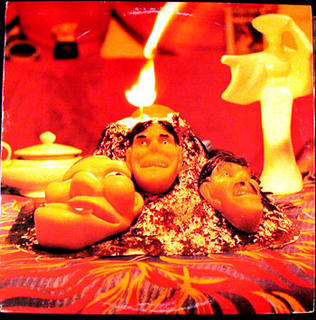 The Spiel: There was a lot of attempts in the mid-80's to put a tag on the particular genre of music that bands like Volcano Suns played. Some called it post-hardcore; others post-post-punk and even later it was entitled pre-grunge. Major Chuck Eddy (Ret. US Army; famous rock critic) famously called it all "pigfuck" to describe the squealing guitars, faux-grit vocals and the veritable pre-occupation with dirtball degradation. Ian MacKaye would lump other bands in here and just disparagingly call it "college rock". Since most of these ... types recorded on Homestead -- Breaking Circus, Squirrel Bait, Phantom Tollbooth, Big Dipper, Antietam etc. (exception: Rifle Sport), you could short hand the sound to Homestead band, although that short-changes Sonic Youth, Dinosaur, Jr., GG Allin and so on. So, let's not go there and instead just say its' all fucking rock und roll.

So...Mission of Burma begat Volcano Suns - drummer Peter Prescott taking the Burma penchant for harmonious soaring vocals and occasional anthems and artful compositions into less artful and more hardcore lands. No more references to Dada artists and Henry Miller essays. Although, come to think of it, the last Mission of Burma record (OnOffOn - 2004) sounds a lot like this record so you could say the Suns begat Burma in a way.

After a false start with the crew that later formed Big Dipper, Prescott found in guitarist Jon Williams and bassist Jeff Weigand about the closest approximation to Roger Miller and Clint Conley. The third incarnation (with Shellac's Bob Weston) seemed more a bridge to his follow-on bands. This record is often labeled as the one in which Prescott gave up some measure of songwriting control and credits are given to the band and other members. Weigand contributes "Cans", a lip curling description of factory work and Prescott and Weigand even collaborate on one song ("Room With a View").

If I ever made up one of those dumb Hornbyish lists of "Best Sides of Rock and Roll", I'd haveta give Side 1 of this record serious consideration. "White Elephant" opens up with a shredding guitar solo that settles into riff stolen from "Greasy Spine"... the song apparently is about a guy who hosts or goes to white elephant sales and finds himself somewhat of a white elephant with respect to his girlfriend. The aforementioned "Cans", another shredder follows-up this cut and it's almost as if the record which was rumored to have been named in allusion to masturbation, has blown its collective wad. But the floating "Room With A View" (the only Prescott-Weigand collaboration) allows us to catch our collective breaths and then it's time for the Suns to crank into a fast-slow hardcore song (about the most "pre-grunge" thing here) called "Blown Stack" which segues into"Engines" - these songs fit so well together I just digitized them together. The side then finishes up with the more Bostonish "Walking Around", a seeming reference to slacking off and what rockers do if they aren't addicted to heroin, I guess. See my recent post on the Rock Turns To Stone compilation for more of that. The side is truly a gem.

Side 2 doesn't quite match the standards of side 1, alas. The song subject matter is more vague but the first few songs seem to be variations on Pigfuck's favorite topic -- Dirtball Americanus- you know, trailer parks, men with guns, depraved killers in the suburbs, etc. It doesn't help that there are practically no liner notes or lyrics (which was a common Homestead record trait). Lou Giordano's engineering often obscures the vocals and leaves the listener just resigned to enjoying the sonic attributes of the song and treat the singing like an overheard conversation in which you can't always tell what the words are. If you've been reading this dumb blog long enough, you'll know that this is one of my pet peeves. So I'm listening to "Sounds Like Bucks" and I'm trying to figure out what exactly sounds like bucks. Fucks? Dollar bills? Trucks? Nyuk-nyuks? The vocals on the song gives little clue.

"Dot On The Map" is a nice guy putdown of small town life ("nice but you just can't live there") and its predecessor "Four Letters' is another head-scratcher as to what its about. I suppose this pondering fits well together. "Village Idiot" is set-up in that stupid bouncy style by the guy that is the "whipping boy" at his job and town and presumably with the girls although this might be an allusion to how Prescott felt while he was in Burma. "Ride the Cog" -- well, finally a song about sex on a train -- gives new and improved meaning to the Mile High Club -- I mean really who wants to screw in an airplane lavatory when you can do it on a slow moving mountain train? And in case you're wondering the "Bonus Hidden Track" at the end of side 2 is a :56 second cut that rants and raves and screams like someone just got his chest sliced open. So this is what an All Night Lotus Party Sounds like.

So Where The Fuck Are They Now?

This, the second incarnation of the Suns, broke up in 1987 in a drunken argument in Baltimore (playing on a bill with Government Issue and Dag Nasty!). The third incarnation put out several records before Prescott called it quits and went onto Kustomized and Peer Group. And last year, he got back together with Burma for an album of new songs and a flurry of touring -- word is that the band is back on hiatus.

Jon Williams is apparently running a lowkey rural studio in Vermont where he's recorded Tara Key and John Fahey. The latter is reported to say that Williams -- if we're talking about the same guy -- is the best producer he has ever worked with. He produced and played as a Barton Boys (basically Antietam ++) on Tara Key's Ear and Echo album - another (sigh) out of print Homestead release and also recorded a few tracks on her Bourbon County '93 release. She credited him in a later interview with "midwiving" the record and I'm sure there's probably some good stories behind that. According to an interview with Prescott, Jeff Weigand went to live in Belgium but I know little else. Back in 2001, Peter Prescott said that Jon Solomon of My Pal God records was said to be looking at doing a Volcano Suns reissue but there's been no news on that since.

Totally Off-Topic - from my other blog:

My favorite Volcano Suns album, a shame that it is OOP. Arcwelder released a pretty decent cover of "White Elephant"

thanks for posting more VS!

All Night Lotus Party is great. I'm also partial to The Bright Orange Years and (ahem) Farced. The lyrics to Sounds Like Bucks seem pretty cut-and-dry to me, though I missed the sexual theme in Ride The Cog.

a great album. I truly think that and not because Jon is my brother which he is. He's also produced some Cul de Sac recordings up there in them woods.

hey...not a bad review of lotus party...tho' your readings of songs is abit off...ride the cog is about two things...I wrote it as a sorta anti minor threat manifesto about jon and me going on some pretty good drinking binges while we were digusted with the music scene and girls...and the infamous train ride up Mount Washington which tends to cut loose ever so often and kill its thrillseekers (sadly, due to modern innovations and safety inhibitions, this rarely hapens anymore)....four letters is about a fucked up relation pete had with a girlfriend...sounds like bucks is just about living in america and all of the money is you bullshit...crotch on fire is about beating off too much, again a sorta offshoot of the girl theme...and room with a view is about me being a young boy and watching the neighbor divorcee masturbate thru her window for many years jeff

I realize this is 2 years later, but we hereby grant you permission to link the album cover image from our magazine.

So set up a permanent link to our site on the left, already!

Oh, and nice analysis. Give us a holler if you have any interest in writing a longer article for a future issue of the High Hat. highhatsubmissions at gmail period com.

I'm always late for these things, but "Bumper Crop" is the one for me.

"I want to make the whole world grow. Just like Barry Manilow."

Bought it on the same day as Husker Du's "Warehouse," and an awful purple tie-dye shirt. Ah well, two out of three ain't bad on the taste front...

Heard tale of Taang! doing re-issues of BOY and Lotus Party with bonus tracks. Maybe now we can figure out some of the lyrics. Im dizzy with anticipation.

hey...for anyone who cares...first two albums ARE being rereleased by taang...this should happen in dec or so...it will include LOTS of extra things...and will be at least two cd's of stuff...we have a great sounding live gig in the bag as well...entitled "live at some fucking college"... things being remastered at the moment...it has been rough going via our meth habits and day jobs...but will be out there...so be patient...jeff weigand

Pre-alt-rock era lurching loudmouths, Volcano Suns, are finally getting some reissue love. On January 27, 2009, Merge will release the first two Volcano Suns records—1985's The Bright Orange Years and 1986's All Night Lotus Party—on CD for the first time, remastered and with requisite extra tracks. The post-Mission Of Burma band, led by Burma drummer Peter Prescott, wailed out of the underground in the late '80s with a sound like the most volatile, if still catchy, end of MoB barreled forward by Prescott's inimitable howl.
This grateful deed comes on the heels of Merge's rescue job for another fine late '80s Boston band, Big Dipper, with their 3-CD reissue set earlier this year. The Volcano Suns and Big Dipper shared some members and the Homestead Records imprint early in their existence.