The Snakes: I Won't Love You ('Till You're More Like Me) 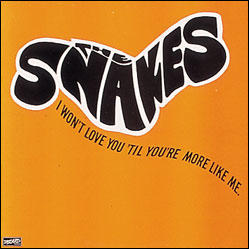 Dischord put this out in the midst of Rites of Spring, Beefeater and Dag Nasty and took a lot of heat from the Dischord fan base expecting another emo record and getting an offbeat (for Dischord) garage punk-pop record. It's probably the first (and maybe only) Dischord record in which most of the songs are about girls and more traditional teenage angst (vs. say missing the vegan pot luck dinner), so I liked it right off the bat just for that.

The band consisted of Simon Jacobsen and Mike Hampton who were in the original Arlington-Cleveland Park Axis of Punk -- they were in State of Alert, one of Henry Rollins' first bands and Mike Hampton was also in Faith and Embrace (the original Embrace). They were a studio band and so far as I know never played out much, if at all. I'm guessing they were formed in high school for fun and somehow someone got them in the studio and Dischord released the record as a limited run. They had a follow-up record a few years later that was co-released with Adult Swim Records and then a CD came out earlier this decade which collected both albums.

The record starts out with the best songs: "She's Got It Now" and the title cut, both tasty piffs of garage punk/pop. That's not to say it goes downhill afterwards but there are a few potholes on this here record. Take the between song "banter' (what the rap kids now call skits) - please and "The Greek Song," a pretty lame attempt at humor at the expense of, well, Greeks, ha ha. "Licensed to Fish" is a kinda funny parody of reggae-dub ("Jah give me de license to fish-fish-fish") but like their embarrassing attempt at rap ("Snake Rap"), both band and Don Zientara are ill-equipped to pull off this type of recording. I might also have advised them, had I been the producer (credited as Ian MacKaye and the band) to get a real drummer -- and I might add so long as I'm being so bold that Don Z's recording techniques with drums were still, back in '83 when this was recorded, amateur hour. The guitar(s) sound real nice though - Don (a guitarist) knew how to capture that, at least.

The other "girl" songs such as- "City Girls," "Pushover" and "Twelve Angry Men" are rousing, if not at times resentful, songs about the ladies of DC (yes, "Twelve Angry Men" is about DC punk girls). I'm not getting down on them - when girl bands write sarcastic songs about men, we celebrate them so I'm like not giving a fuck if there's a little high school misogyny. Not all the songs are about girls, though - there's one about a rich friend "who living a lie-ah" (heh), "For Colored Girls" is about suicide (it's bad, doncha know) and a lovely chugging song about the working stiffs of suburbia ("Six O'Clock"). "Serv-Pro Joe" tells us about life from the eyes of some invisible working class dude whom everyone has ignored and is about the closest they get to their thrash roots. When they concentrate real hard, these guys made some pretty cool garage punk for their time and it's cool that it popped up on a label that normally wouldn't release this type of music.

Wanna buy it?
I'm as ever confused by the Dischord website (what? you wanna buy our records?) but apparently a cassette of their second release (Happy - co-released with Adult Swim Records) is available for $4.00. Adult Swim describes the CD version of Happy as including the entire I Won't Love You tracks but I don't know if the cassette version does the same because the Dischord site doesn't adequately describe it's "half-label releases".

Here's what Hank wrote about The Snakes when he played them on his old radio Harmony in My Head radio show a year or so ago:

Snakes Â– 12 Angry Men: This is Mike and Simon, my two former band mates from DC. They had a band called the Snakes that was for fun but eventually recorded two albums. I think the album is still available. ItÂ’s called I Won't Love You (Til You'’re More Like Me.) Ian MacKaye Produced the stuff and for a minute there the two LPs and the CD were in print but looking around on the internet, it seems the record is now rare. How much would I like to print up 500 of these, itÂ’s such a great CD. Anyway, this song is about punk rock girls in DC.

Yeah, it drives me crazy that the Adult Swim twofer CD (I think that was the label breakdown) is out of print; I played the wheels off of this record back when it came out. "Serve-Pro Joe", "12 Angry Men", "For colored Girls" -- so many great songs.

I remember inquiring about this at the local record store many years after seeing it in the Dischord catalog. When I asked the clerk if they could order it he scoffed "Why, it sucks" and that was that. This my first chance to hear the Snakes and the clerk was wrong, this doesn't suck at all.

Sheesh. If anything about High Fidelity didn't annoy me, it was Jack Black's portrayal of an all-knowing record store clerk. I like to think he was exacting revenge of people just as you described.

A-ha, so Tesco Vee's "Dutch Hercules" ep wasn't the only record Ian Mackaye produced, released or performed on that had politically incorrect lyrics. "Dutch Hercules" has a song that pokes fun at lesbians. It also has a really pathetic attempt at what they used to call "rap" back in tha day, with Saint Ian, as "Mr. Egg Gumbo," hippin' and hoppin' in the background. A great record.

And Snakes are amazing, I'm a bit obsessed with the albums, and the music, if you listen enough, will grow and grow on you, like the tumor likely growing in my brain. Snakes, buy it from Dischord.