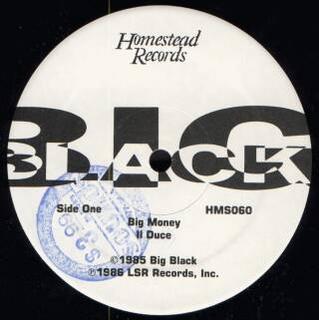 This was the record that ended Big Black's recording deal with the Dutch East India / Homestead label. As explained in the Big Black Portal (from whom we've "borrowed" all images), the agreement between the band and the label was that this record, lacking any cover art or liner notes, was a radio station promo and not to be sold. There were 500 copies released and a couple dozen "test pressings" but then the label sleazes reportedly started selling copies in record stores outside Chicago thinking the band wouldn't find out. 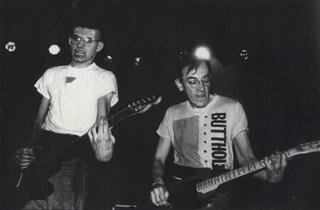 Steve and Santiago: Photo from Sound of Impact
I found mine in a DC record store in a Mylar snuggie with the words "Test Pressing" written on top in Sharpie pen. I've pretty sure, though, this isn't a test pressing but the record collector scum in me couldn't resist laying down the $7.99 for a band I knew would remain big for a long time. Actually, it had been in the bins for several weeks but because the band was so unpopular in DC, it sat there for weeks or maybe all the fans didn't want to pick it up because they sympathsized with the band. After a few weeks, though, I couldn't resist.

The three live cuts (recorded at the Prince's 7th Street Entry club where Prince played in Purple Rain) appeared on the semi-official Sound of Impact (Blast First/UK) and just "Cables" appears on Atomizer.


Acquire This Shit, You Cheapskates:

There is a copy of this 12" promo (not the test pressing) available on Gemm, unplayed, for $57.50. I don't know if this link will work for long.

Touch and Go reissued the "Il Duce" / "Big Money" 7" in the early '90s so you can find it in the used stores and on Gemm, Ebay and the like. You might even find the original 7" (Homestead) there as well. "Il Duce" was also included on the seminal Wailing Ultimate compilation but that's pretty hard to find as well.

Prince having owned the 7th Street Entry/First Avenue niteclub in Minneapolis ia a very, very popular misconception. Fact is, he's never had dome one invested into the place. While Warner Bros Pictures spent a lot of money to lock the place down exclusive for about a month of principal filming for the film Purple Rain, true, but that'd be a rental agreement entered into by a film studio to film its "star" which of course ain't the same thing as "ownership."

Thanks for the correction, Peter. It has been corrected and the Vinyl Mine factchecker have been given a vigorous over-the-knee spanking. She's been on the sauce since her parrot died. I suppose the next thing you're gonna tell me is that Prince never bought that purple guitar from the pawn shop either and Morris Day is gay or something.

Not to nipick, but I'm pretty sure that the version of "RIP" on the promo 12" is actually otherwise unreleased. That's the whole reason I bought my 12" in the first place. The two versions of "RIP" on Sound of Impact are from other gigs. Go on, play 'em all back to back and you'll notice the difference (vocal is mixed lower at the beginning of the 12" version).

Big Black: Sometimes I still love them, sometimes I think they've aged horribly. Still, I wouldn't mind one day locating the insert that was missing from my secondhand Ruthless pressing of Lungs.

No, that's a good nitpick. Yer probably right - the liner notes on Impact say MPLS and Cleveland, presumably on the same tour, so the Rip on that side could've come instead from Cleveland. I am currently putting together a sackcloth and ashes for my factchecker.

I'm amazed you single out the drum programming for praise as that's the single element which *does* massively detract from Big Black in retrospect. (At the time I viewed it as further proof of just how futuristic they were. doh!)

Does anybody know whether Albini has since passed comment on this vexed issue?!

Well, maybe the sound is dated but the programming is certainly better than most drummers would have come up with or at least were doing prior to that time.

For example, I find Rey's drumming markedly different from, say, Scratch Acid to Rapeman. My guess is that it was in part from the influence of Roland... maybe I'm wrong. I remember Johnny Rotten complaining when he was putting together PiL that he could'nt find a drummer willing to think outside the box. Perhaps it took a guitarist (or guitarists - I'm not clear if Albini did all the Roland programming) to break the mold.

I remember reading an interview with Albini around the time of Rapeman and he just said that it was time to retire Roland. I assume he meant he had squeezed whatever he could out of the machine and was moving on.

I can also remember Albini saying at the time of Big Black that the only reason they used a drum machine was that they couldn't find a decent human one ie it was an entirely pragmatic (as opposed to aesthetic) decision. I just wonder if he thinks it was an aesthetic error in hindsight. I must admit I do personally...but that said, I can't even begin to imagine a human drummer doing justice to Kerosene so it's not *that* cut & dried...

Because you're a vinyl-friendly site, I'll point out that you can still get new copies of the 7" for "Il Duce" from T&G for $3.50 instead of resorting to GEMM or eBay (although they may be cheaper).

It's been a long time since I've heard this track, so thanks for uploading!

Thanks - when I checked Touch and Go, I couldn't find it available but that might just be that their site and their search function wasn't of the best design.