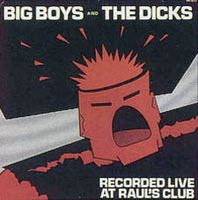 Eric of Something I Learned blog covered this record a few days ago but only concentrated on the "D" side - i.e, The Dicks. This posting will (attempt to) cover the "B" side - for Big Boys. It's easy to see why the two bands were paired - obviously both are from Texas, they both have in-your-face vocalist with a penchant for outrageous costuming, they have non-orthodox songs (slow, fast, ska, punk whatever) and yet a similar L.A. '77 / new wave - punk feel to the music. I believe Big Boys, though, pushed it farther and harder in their later years and are the more important of the two bands.

Coming out of the '80s, though The Big Boys were all but forgotten until Corey Rusk from Touch and Go Records released all their best material in two CD sets - Skinny Elvis, covering their early new wave years (this record is included) and Fat Elvis which covers their later, funk-spewing "hey Ma, I can play my instrument" era. Big Boys are often compared with minutemen, in that they eventually broke with some funky bass lines and somewhat similar harmonies. But where the minutemen followed a free jazz, found art faux-working class aesthetic, the Big Boys were, at least in the early years, despite their art school roots, more interested in low-brow culture ("Red/Green"), having fun ("Night Beat") and watching creepy movies ("Psycho"). Politically, they were more like Black Flag with songs about rising above urban alienation ("Out of Focus", "After 12:00") and dealing with cop harrassment ("Detectives", a rip off of "Secret Agent Man"). Been there, smoked that.

This "B" side is more of a hint of the powerhouse they would come as documented in Fat Elvis and their later LPs. Hence, it's more for fans and the like and not recommended as essential for a rounded out collection of 80's music. For instance, bassist Chris Gates has yet to really rouse his inner Bootsy Collins, and Tim Kerr has yet to mutate into the sturm and skree guitarist he would become in later years - although there are hints of both (for example, in "Out of Focus").

Still, like their later stuff and the minute-dudes, they refuse to be boxed into one orthodoxy - jumping from snakey raga-reggae punk to skunky ska beats to rawer new wave, sometimes in the same song (for instance, "In The City" which mixes L.A. punk style harmonies (X meets minutemen) with a bridge that sounds like it came from a Police - the band - record). "Night Beat" is a sort of pre-thrasher with a funky break. There's even a bar band scorcher here ("Red/Green") here that apparently other bands love to cover. It's prophetic that their earliest recording were live since they were known more for their energetic shows than anything they managed to get out in the studio, a fact which contributed to their lack of recognition when people started putting together best of lists, I suppose.

To those that want to know why the Big Boys are worthy of study & praise - just realize that their funk-punk predates Kingface, Fugazi and, debatedly, The Red Hot Chili Peppers who once opened for them and were described by Tim Kerr is being more into James Brown than punk. Besides the funk fusion, guitarist Tim Kerr also deserves some recognition for being among the first (predating Jon Spencer at least) to fuze a bluesy howl and kerrang with punk fucking rock (Poison 13). He also took these concoctions with him into later bands - Monkeywrench, a follow-on to Poison 13 in collaboration with Mudhoney and Bad Mutha Goose, a more straight out funk collective. In-ya-face singer Randy "Biscuit" Turner is said to be among the the greatest frontmen ever by none other than Henry Rollins. Finally, their goofy stage antics (there's a picture here of them playing in KKK costumes) made for a welcoming development ground for other like-minded Texas bands such as The Butthole Surfers and Scratch Acid. The CD liner notes for the Touch and Go releases say it much better than I, a mere mortal, can.

I've included two later songs for comparison purposes - one the pure out funky "History" from Rat Music Vol 2 and "No, a cut from Fat Elvis which is more in line with the skater metal-punk milieu and shows how much Randy Turner and Tim Kerr came in terms of their confidence and competency. 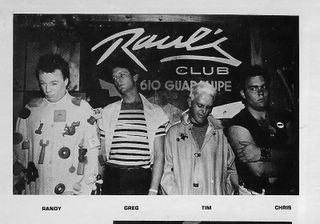 Songs from Big Boys Recorded Live at Raul's:
"Detectives"
"In The City"


Tiny print: As usual, these songs are up for a short period and posted in the spirit of fair use in order to spur discussion and thought about the legacy, history and culture of independent music. If the band or label wish me to remove them, I will do so in good faith without any hate and discontent even though I dispute that this falls outside of fair use.


Song from Fat Elvis:
Download "No"
(Go to Tim Kerr's webpage and download from here - there are more downloads from his other bands and new work as well)

The Big Boys played a hardcore matinee at CBGB in the early 80's and were fat, loud, funky and rumor has it, somewhat gay. Wow! They out hardcored every New York punker and macho skinhead in the joint. Along with Minor Threat, Faith, Butthole Surfers, and Black Flag they were the best live band of the era. The next day I saw the singer, Biscuit, selling his homemade jewelry on St. Marks place and he was really nice, and he was a skater.-Thurston Moore

Excellent write up, as always. Such a great record, this may be the Big Boys at their calmest but it's still great stuff. "Red/Green" is my favorite off of this one.

Excellent taste in music. This is some good stuff. I also enjoy your writing style. I am gonna link you if thats cool? check my blog, you may enjoy some of the tunes http://small-bedroom.blogspot.com