You only get this offer for a limited time... 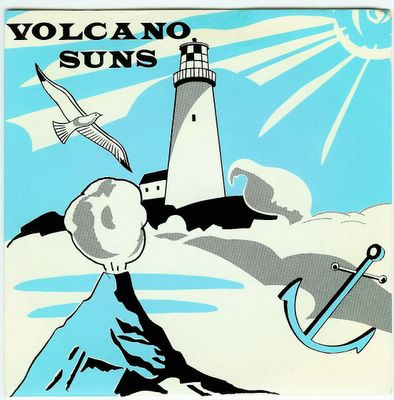 Here's your Friday cut, a slightly noisy rip of the B-side from the Volcano Suns between albums 1 and 2 single. Post Mission of Burma, Peter Prescott spent a few records not being very serious (while his former bandmates went off and did the opposite). The a-side, "Sea Cruise" is much more Burma like, complex and angular but not afraid to say "whoa", that's a killer riff, partner.

"Greasy Spine", well, I'm not sure what they were smoking but they must have been listening to Killdozer at the time. Michael Cudahy and Liz Cox (2/3's of the great band Christmas), always good for some laughs, are credited with guitar and backup vocals and Lou Giordano produced.

Jim... I hate to be one of those people that make requests when I know damn well you don't do requests... But posting the A-side would be freaking wonderful, as I have been looking for these tracks for awhile (and they seem to be hard to come by)

Wow, I'd just love to hear the MP3 as posted... seems to be gone. So sad! I remember this song fondly...