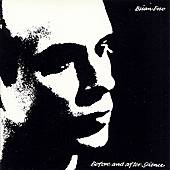 Before and After Science LP
JEM Records (Reissue), 1977

One of those records that continues to grow on me some 18 years since I first heard it. My original preferences with this record ran towards the jumpy cool-headed pop on Side 1 where Eno prophesies what he's going to do in the coming years with collaborators David Bowie (Low, Heroes) and The Talking Heads (Fear of Music and Remain in Light) and even takes a detour to try his hand at prog-rock with Percy Jones' sublime fretless bass ("Energy Fools the Magician") - and, um, Phil Collins on drums. It's jumpy and energetic throughout - always a surprise around every corner. "Backwater", the second cut looks back at his pop career - this song could have easily fit onto Taking Tiger Mountain by Strategy (my fave Eno record and one of my top 50 albums). The final cut on the side is sort of an offbeat tribute to The Talking Heads and is almost interchangable with their pre-Eno Talking Heads '77 release that came out around the same time as this album.

But its side two that has aged the best, predicting, as he did in the even more sedate Green World, his decades long foray into ambient music forms with "Through Hollow Lands (for Harold Budd)" (featuring Fred Frith) and laying down the first steps towards electronica with the lyrical album closer "Spider and I" and the intimate "By This River" (surprisingly co-written with Moebius and Roedelius from Kraut-rock band Cluster). This latter song has recently gotten some new life on the soundtrack of Y Tu Mama Tambien and it is almost interchangable with the cream of the crop of "indie pop" genre.

Before and After Science is commonly referred to as his last "song" album until, well, next month when the cool people of the world brace for his first solo pop album since, well, Before and After Science. From all accounts, the new record Another Day on Earth will be similar to this - working with a variety of musicians, experimenting with new sounds and instruments that Eno claims haven't been used in pop songs before (for instance on this album he has Fred Frith playing Cascade guitars and Shirley Williams on "Brush Timbales"). So, I'm looking forward to it - don't know about you - see excerpt from an interview about this new record below. 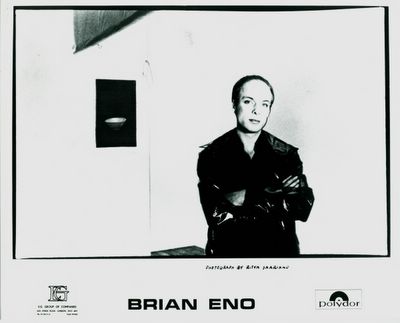 Eno, circa 1977 (he was in an auto accident in 1975 and re-emerged with short hair and a different attitude but he is still exuding some of that Roxy Music 'tude here)

Song:
"By This River" - recorded straight from some rather low-grade vinyl with no post-processing.

As usual, this MP3 is for sampling purposes only and is only available for a short period. The reader is encouraged, if he or she likes it, to buy the albu or song in the variety of formats in which it appears. At the request of the copyright holder, it will be taken down as fast as possible.

How to Buy This Record:
Saved Round:

Q: You have done an album of "proper" songs recently, which will be released next month ["Another Day on Earth."] What kind of songs are they? It's very interesting because it's something that people probably didn't expect from you.

A: I hope so. Yes, I mean it is something that people didn't expect. It's kind of harder thing for me to do than to make an ambient record. I can make ambient records during my sleep now, if I want to. It's very easy for me that area. So I was interested to make some music in what is a very challenging form, namely the song format, it's a very difficult form to work in.

So I had a couple of thoughts in my mind. One is I want to do new things with voices that people haven't done or haven't been doing much of. And I want to do new things with sound, the kind of things that don't usually appear in songs. So some of the ideas I learned in instrumental music I want to transfer in the songs. Instrumental and ambient music, you know. And that's what I've been doing.

Q: You are planning to have it released in Russia first, rather than in the rest of the world. Why?

A: I thought it'd make a nice change. I want to release in Russia and China first just to make a difference, because everything always goes by the same routine. Of course, it's released in England first with the English newspapers do it, and then the Russians get it after a long time. I thought, let's change it around a little bit. That also gives me a chance to fly over some British journalists to Russia, St. Petersburg, probably where they can actually see the country because most British people have never been to Russia. They have no idea whatsoever about it, how it might be. So it's a sort of slightly educational enterprise.

Right after I wrote this "The Eiger" by Oneida came up in the random play and I immediately could hear some of the Eno influences.

Quick - go to Mesmerization Eclipse for a taste of that cut.

"Before and After Science" keeps getting better for me as well. The second side really is amazing, esp. "This River" and "Julie With..."

I actually had the opposite experience as you. I fell in love with Side 2, which I still think has aged better, and later warmed to Side 1. Of course, "King's Lead Hat" has always rocked my world.

(By the way, have you heard The Dirtbombs cover of it? It's sooo good.)

that's a nice song. i've obviously heard of brian eno quite a bit over the years, but this is the first time i've ever knowingly heard a song of his. i like it...might look into it further...

the only new song i've heard from the latest album was pretty dire so i'm not looking forward to it as much as i was few weeks ago. still and all, i've pre-ordered it anyway.