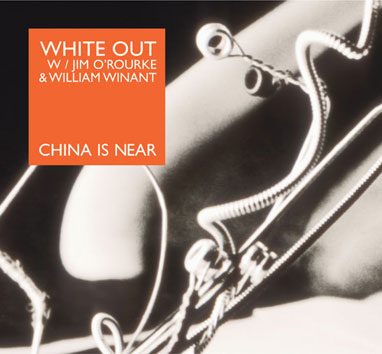 White Out have a new record, China is Near, coming out next month (release date: June 20th) with percussionist William Winaut and Sonic Youth-er Jim O'Rourke.

This is from their upcoming album (release date: June 20th) on All Tomorrow's Party fledgling record label. ... ripped from a recent WFMU broadcast.

If you like industrial but were disappointed with yesterday's track from Milwaukee's Boy Dirt Car, this is my penance.

Lin Culbertson, one half of the band along with ex-Blue Human/Rudolph Grey sideman Tom Sturgal, is originally from Wisconsin so there's some symmetry here as well...

Note: I mislabeled the ID3 - it should be "Empty Center" - not "China Is Near"... (and standard disclaimers in effect). UPDATE: I got the song name wrong too - it's been updated now. The rip came from this show
Posted by Jim H at 7:10 PM

Hmmm. I don't get this one, either. Random "percussion" and voice clips just aren't...well, melodic enough for me. Guess I'm too young.

Most people don't like this sort of stuff - I don't think age has much to do with it, though. The use of televangalists' voices in these types of things is somewhat rote but that only makes it more interesting that they feel confident enough to do it without worrying that it was being done 30 years ago.

I just like how they have changed the message and presented a pretty creepy atmosphere (and I don't totally dislike the Boy Dirt Car cut I posted either). IT works in the right mood for me.

this is for jim h i dont know how else to get a hold of you but i will try here. can you tell me what you know about tom sturgal thanks email me at jason.l.sturgal@us.army.mil