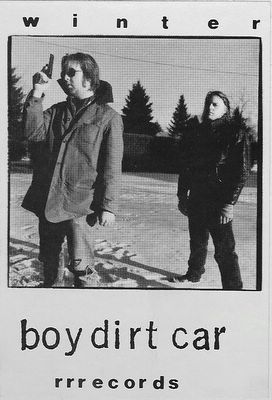 I think I like the IDEA of Boy Dirt Car more than the actual product of Boy Dirt Car. There's some on here worth saving and some that sounds, uh, best left on vinyl. The IDEA of Boy Dirt Car is a buncha bored Midwestern teens, inspired by a Glenn Branca concert but otherwise isolated from the Euro/NYC noise-art scene (SPK, Nurse with Wound, Blackhouse, Whitehouse, Neubauten), decide to set up a recording studio in their vast backyard (in my mind's eye, it's an abandoned camper-trailer set about 500 yards into the woods). They pull together guitars, pedals, glass, metal shards, radios and a glob of Midwestern cabin fever angst. Said boys get snowed in for about a year (because you know it snows up North from like September to May), record jillions of hours of tapes, burn all their album covers for heat, perform no-novacaine denistry on each other, catch small animals and hook them up to treadmills to power their guitars amps and tape machines. That sort of shit. Normal, all American boy shit. Anyway, that's the IDEA of Boy Dirt Car.

In actuality, their noise is little different from many of the other similar cassette tapers who did this sort of industrial ambiance during the '80s (and I've got a box full of tapes to prove it, boyo) - the principal difference was that one day Dan Kubinski and Dave Szolwinski came knocking no the trailer door. Dan and Dave happened to be in one of the hottest bands (underground bands, I mean) at the time - Die Kreuzen - a sort of pre-metalcore, cross between Napalm Death and Celtic Frost, pre-grunge, post-hardcore band if that makes any sense. Pretty soon BDC are touring with Die Kreuzen and people are checking them out, buying their wreckords. They get included on the seminal Sub Pop 100 compilation. They open for all sortsa bands (including Screamin' Jay Hawkins). Die Kreuzen's first two albums on Touch and Go are among that labels' finest of that decade (or at least that's how I remember it, said albums are still in boxes in the closet and I haven't listened to 'em for years) and people are still imitating them. I know, I turn on that stupid metal show on MTV every once in awhile (yeah, insomnia). I'm just implying that perhaps without this association, BDC might have been Boy Dirt Obscure.

So besides the idea" of BDC, what's to like about Boy Dirt Car? Well, I like the cuts that have a semblance of rhythm to them. Makes 'em interesting because at least you can hope they're going somewheres. F'rinstance, the album's "tagline" song, "What Never Ends, Begins Today" sounds like they were turning over the engine in the trailer cum recording studio and they got that "stic-stic-stic" sound that the actuator (don't trust me on that but its the thing that makes the little clicking noise you get when your battery is dead or the engine won't turn over... whatever) and so someone turned on an amp, kicked a guitar or two on and then another amp and then maybe a shortwave and they just layered feedback and noises to get this whole ominous vibe going. It woiks, by george.

"Western Nile", featuring dismembered voices, processed guitar, smashing glass sounds and the only other track with a sort of beat. Some of the vocals are "trying too hard" but the overall effect is creepy enough, I guess, for the genre. Maybe after they recorded this they watched an all night movie horror-thon and realized that they had transposed The Mummy into the barren snow swept windscapes outside the door... and so they went back and listened to it and said, let's call it "Western Nile" cuz it's like those mummies and shit ... ok?

Some people said they saw Boy Dirt Car as "mysterious" and "scary" - I mean by this, not their music so much as the band themselves! Blackhouse were scary to me - they gave these creepy straight-faced interviews for one and the tracks sounded like the soundtracks to multiple unspeakable atrocities - but Boy Dirt Car, I mean, I'd done this type of stuff in my basement. I never thought RRR Records would put it out (maybe I shoulda mailed it to them). And yet they did and Lexicon Devil (Australia) re-released it in a CD a few years back! Scary? Maybe the idea. I'm not saying saying I would want to let them watch my cat for the week but if I saw them coming down the street, I'd probably just shrug and continue clipping hedges or whatever one might do in Milwaukee.

Like I said, I'm less than enamored with the rest of the record wherein they "explore" more "soundscapes" -- maybe I'd reconsider "Prairie Fire" (which, yes, sounds like a prairie fire). So end spiel...

The insert includes a catalog from RRR records and this note from label owner Ron Lessard: "It was real nice of you to pick this Boy Dirt Car album - I do hope you enjoy it - fuck you if you don't." Oh eat me.

+ for eval purposes only
+ (meaning: buy the records!)
+ all mp3s up for limited time
+ removed if owner requests
+ no direct linking please
+ mind the bandwidth
+ cells off during the film
+ do not place in microwave
+ enjoy

yea...this is just mediocre crap. I don't get it. I have heard countless variations on this shit, and there is nothing interesting in the sounds or composition. There's not evern a 'mood'...the only thing I associate with listening to this is seeing scrawney noise boys making a bunch of wankery racket.

I post 'em - bad or good. As I said BDC had little to distinguish it from a lot of others except for their connections to Kreuzen.

I prefer Jeff Grienke for my ambient 80's industrial.

I do like some of this record. One of the reasons for this band's cult popularity back then was their live set, which featured post-Neubauten yet pre-Crash Worship fire, destruction, and ritualistic mayhem. They certainly fried the mind of at least one friend of mine back then. Winter is probably the best, if you don't like it be sure to skip the double live LP or the triple LP boxset. F/i (another Milwaukee band reissued on Lex Dev) absolutely rule, though. Check 'em out.

Dave is my brother!! I was so happy to see this on the web. He is one of the greatest alive. The music may be not to everyones liking, but he was always the one in the family to do what he wants. No corporate shit for him or finding a job that would "conform to society". I am very proud to say that he is my brother. I am the baby of the family and he definately has introduced me to many different genres of music and because of it my children are learning to do the same. I saw Boy Dirt Car live many times and scratched my head as to what is this?? But...the creativity has to be given credit. Listen to some of the crap today and wonder why it is popular...

Thanks - anon - what is Dave doing these days?

Jim H.
Dave lives in Seattle now. Half of his record store is in my attic-very interesting stuff. He still keeps in touch with a lot of the old friends of his. Helps the Violent Femmes when they tour and has a job with a leather company. I find it so interesting that someone actually finds his past interesting. Thanks! I can't wait to tell him this!! MJ

Dave is my dad. I grew up in a record store with him working behind the counter. He is a very interesting man and has alot of interesting music mementos. He used to write for a local paper and I was the music critic for him..THe best part is that I was 7 years old! He would have me listen to all kinds of music, Sex Pistols, Sousxie and the Banshees,etc. and I would tell him what I thought of the music and he would have it printed in the local paper! I have not seen my dad in over 8 years but he has given me a great appreciation for music. My greatest memory is of all of his vinyl records that had pictures of the bands on the actual record itself like Kiss, Iron Maiden, Elvis Costello, etc.... Also, for people who think this is a bunch of young kids playing in the band..alot of them were in their 40's!!

Reading Dave Langs stuff on Milwaukee bands and now this makes me want to buy the Boy Dirt Car stuff I have not got/heard..so I'm trawling the net now to see what I can find.. cool/thanks
Brian
www.tonkadoesnotrock.blog.com