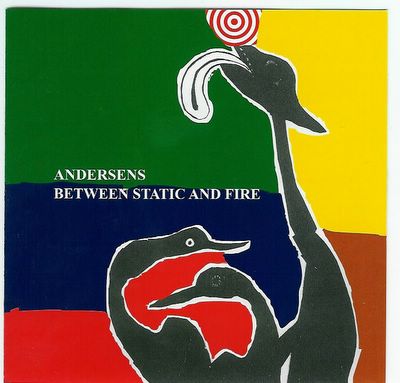 Between Static and Fire
Majikick CD, 2003

ANDERSENS were one of the bands I wanted to hear more of after listening to Song for Nao (reviewed previously here) and this 2003 record doesn't disappoint. Less folky than the cut on Nao, the band languidly approaches pop, twee, psyche and, yes, folk with a healthy smattering of guests to cover, quite handily, guitar, sitar and banjo - different pieces of percussion are used, not abused, throughout to add additional texture to the songs. Although they are classified as "lo-fi", I think that's only because the three core members are somewhat tentative on their instruments as I can't see that their recording, while intimate, isn't being done with the highest standards. The band is built around a core of three high school friends (by 2003 they are probably in their very late teens or early 20s) and Yoshiko Iguchi who joined the band with this their second disk.

There's pieces and parts of VU, Yo La Tengo and some of the twee folk (Jennifer Gentle springs to mind) but with lots of spacey reverb. Like "Swan", the cut from Nao, they aren't afraid to just stop a song in its tracks and let one instrument carry things for a verse although unlike "Swan" the songs are simpler and mostly not as full of surprises, at least within the pieces. That said, they show some skill at sequencing the songs - building smaller instrumentals are the longer, more substantial pieces - and even with the slow tempos, this helps the listener catch their breath.

Songs:
Buy via Jet Set Records on Gemm: Andersens - Between Static and Fire

Well, I finally got a taker on my challenge: SEB, a Canadian living in Japan (coincidence!) who obviously spent a good deal of time in my fair city takes on the meme in his "And you may find yourself..." blog He's got a better list of instrumentals than I was able to come up with. Maybe if we're nice to him he can score me the latest ANDERSENS record since JetSet doesn't seem to be carrying it at this moment.

Again, the offer stands - do the meme and I'll drop you a link... fyi, if I forgot to say it before: the originator of the meme is 12thharmonic blog so let him know if you do it as well.
Posted by Jim H at 9:21 PM

RE: your comment at th' Hut as to "The Wire" and "Deadwood"-- son, where do you think I am every Sunday at nine?
In front of the cocksuckin' TV, that's where!
I think this season ends with the first Deadwood fire. Read yr. history!

Yeah... although this Friends "reality show" w/Lisa Kudrow and the Paul Newman / Helen Hunt weeper movie they are hyping looks pretty lame. I am looking forward to their show about Rome and the final season of Six Feet Under, tho'...

Thanks for the link, Sir Jim. I quite enjoy your blog, and your photos of DC make me misty-eyed for the East Coast (I use to live in Baltimore). And in all sincerity, if there's any Japanese music you want to get your hands on, please let me know. I'm very much of a "let-1000-dandelions-bloom" mentality.

HRH Courtney, Queen of Everything said...

Actually, I took your challenge as well, just neglected to inform you.
http://midvaleschool.blogspot.com.
Enjoy.
c.

I did a meme as well, on my unrespectable journal-type website. Here you go:

I also offer full MP3s for my "favorite lyrics" songs (you can't understand lyrics without the music!). Feel free to listen to a few if you're feeling bored. I warn you, however, I'm an impressionable teen (16 - almost 17), so my taste might not be as refined as your own. Great songs all around, however, and I'm surprised SEB at least partially shares my love for the wonderful band, Self.

Sir Jakob, apologies that I cocked up the Self lyric. It's honestly been quite some time since I threw on "Gizmodgery" for a listen, so being as lyrically uninclined as I am, I was bound to fuck it up. It's good to see that Matt Mahaffey's fan base extends beyond those who heard him in college in the late '90s.