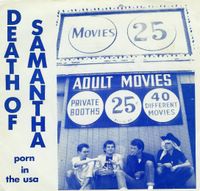 Named after one of Yoko Ono's better songs and naming their second single in sarcastic honor of the Bruce Springsteen LP came Death of Samantha, a post-Ubu Cleveland band organized apparently to perpetuate the craziness of that city's music scene. Leader John Petkovic sings in the key of Jim Morrison but as if the sucky Oliver Stone-imagined Indian chief never imbibed in Jim's flesh and freed him to be uncool and uninhibitly unselfconcious. The band roams around here like a bunch of excaped mental patients who listened to Pere Ubu tribute records in the romper room and then instead tried to play songs written by Tom Verlaine and Velvet Underground. In other words, its fucking great and it rocks to boot.

Even though "Coca Cola and Licorice" pays tribute to key early new wave, it also mocks it just as it mocks Springsteen with its title. The "junkie" isn't on the street looking for "H" but has a sugar fix. I don't know which is worse but the resultant wigout as the sugar junkie goes on the prowl only makes it funnier. The flipside also mocks rock with its cover of a cartoon character's song (probably written in a board room by Hanna and Barbara).

This 7" was a kinda promo for their first record (of four) with Homestead records (a relationship John Petkovic came to regret) and included a cut from that record, "Coca cola and licorice" and a cover of Fred Flintstone's "Listen to the Mockingbird" ...

All that wank said, how could I not reprint Byron Coley's liner notes (click to enlarge and read) which makes my own writing pithy and inconsequential by comparison? Hell, they make Meltzer's writings tiny: 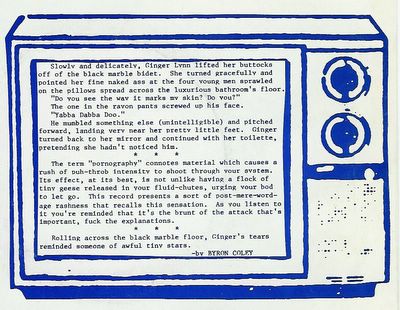 OK, so continuing the history lesson - DoS broke up, went dormant and re-emerged in full but without Steve-O the wacko comedian drummer as the contrarian (big surprise!) yet "serious" rock band Cobra Verde. They sort of went from being Cleve-O Rawk to being Clevelande Rocke, a more serious yet still "fuck they can rock" band that is in essence DoS but is Cobra Verde. Geddit? No? Neither do I. That's why I find it so sad that John Petkovic has resisted re-releasing his back catalog. He seems to be embarassed by it. No way. I love that shit and so would many others. Give us that box set we crave dude.

And.... so.... Last month Cobra Verde released an album of reworked covers called Copycat Killers which might be of interest to folks who like that sorta stuff. I've heard two cuts from it and it sounds interesting. They've chosen songs from "outside' what you might normally guess they would cover including Pink's "Get The Party Started" (a song which I guiltily love) and Donna Summer's "I Need Love". They also do the Troggs and New Order. I mean, can anything be cooler? (Oops, I forgot John hates cool).

So it seems appropriate that their first recorded and released cover was of Fred Flintstone trying to be a rockstar. You may or may not remember the episode where Fred, on a lark, records a song in one of those carnival recording booths (kinda like Bobby Darin) and some kids find it and make it into a cult favorite. Fred eventually is turned into a rock star but he turns into an asshole and Wilma sort of bails him out by telling everyone he's a "square"... some say its where the Flintstones "jumped the shark" so it seems appropriate for Petkovic who has always has a nasty word to say about "alternative' rock to take this on as his own. And come to think about it, Petkovic's singing is like Morrison as if inhabited by Bobby Darin's drunken spirit (and yeah, yeah, Bobby Darin was straight edge...).

DoS turns the harmless cartoon song into a mental patient (see a pattern?) obsessed with killing mockingbirds (and as someone who once lived with a mockingbird outside one's window, I whole heartily concur) - anyway, it's nothing like the original but more like a sister song to "Surfing Bird"... And it asks the ultimate question: what if Fred Flintstone starred in To Kill a Mockingbird instead of Gregory Peck?

Songs:
"Listen to the Mockinbird" - Death of Samantha
(if you really feel the need to hear "Coca Cola and Licorice, drop me a line)

I can't tell you how many times I saw DoS or CV open for a "bigger" national act at the Phantasy Theater or Peabody's Down Under in Cleveland.

When I was a young'un waiting for the opening acts, I hatedhatedhated them sooooo much.

I was a pretty dumb kid.

Ah, I'm sure Petkovic dug that you hated them.

Greetings,
First of all, it's "Cleveland Plain Dealer" without a hyphen, and second of all, I am pretty dern sure Byron Coley wrote the history of Death of Sam to which you refer.

oh, by the way, Steve-0, besides playing in various local bands, also recently made the news as part of the largest group of Elvis impersonators ever to sing "Viva Las Vegas" together.

Byron Coley is definitely the author of the Death Of Samantha history.

Coming waay late to the game via google, but had to check it out. Dig DoS, but really love the ol' Spike in Vain records. Anyhow, thanks for showing old Cleveland stuff a little love.

BTW: Just ripped a copy of SiV's "Disease is Relative" to mp3s if you're interested...